As Steve Sunshine tells it, all of his children have exhaust pipes.

“Cars are a passion, an addiction, a disease,” says the New York native, Scottsdale resident ––and car lover wherever he is. “They are an incurable, wonderful disease that will make you happy, make you crazy, make you scream, sometimes all at once.”

In the seat, it’s man versus machine. “It’s being in control, making the perfect gear change, kicking the rear end loose in a corner and steering with your right foot. No electronics, no radios, nothing. Just me and the car. Ah, blissful.” 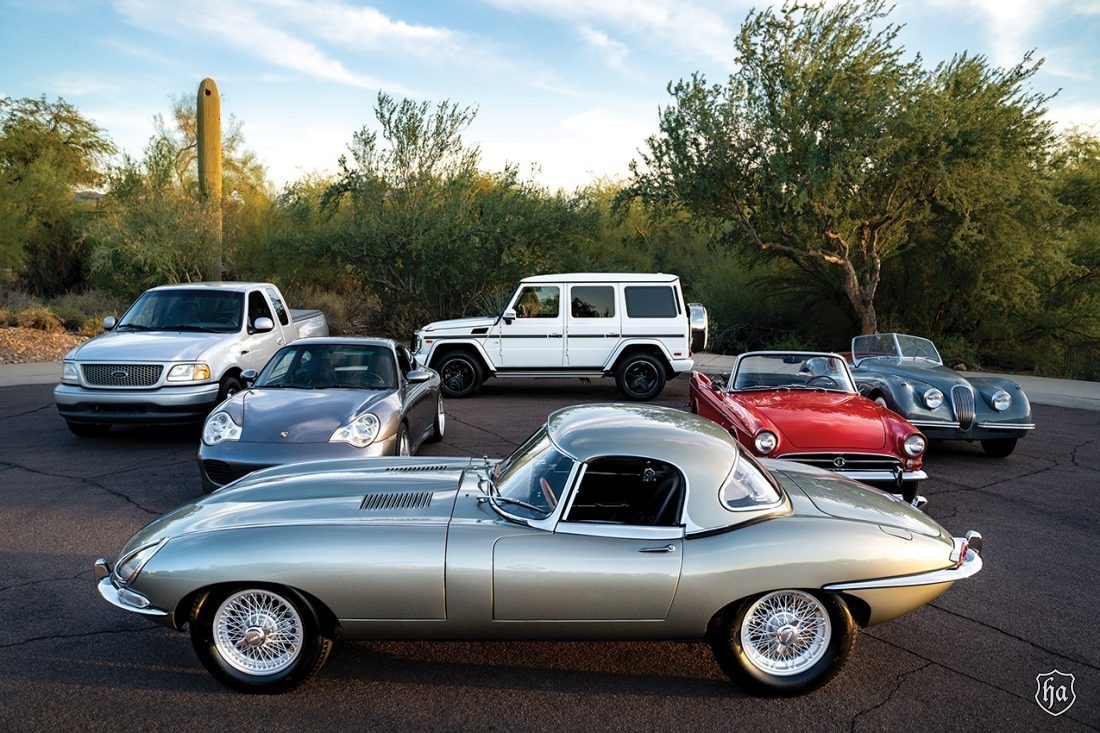 He has nine cars in his garages, some of which he keeps at his north Scottsdale home, others in his friend’s “secret shop” in Gilbert, a half hour or so south, where he assists on special projects. The collection represents a half century of automobiles, including 1954, 1961 and 1964 Jaguars, 1964 and 1967 Sunbeam Tigers and a 1994 Jeff Burton NASCAR Rookie of the Year T-Bird which he raced, sold, and has now been reunited with to sell again for its current owner.

Sunshine began his car passion at 6 in ’61. He was living in native Brooklyn, New York, “where you could walk ten blocks and never leave the scene of a crime,” he recalls. At the New York Auto Show that year, he saw the reveal of the Jaguar E-Type, which many, including Enzo Ferrari at the time, believe is the most beautiful car ever. He has two parked safely in the garage for eye, hand and foot pleasure. 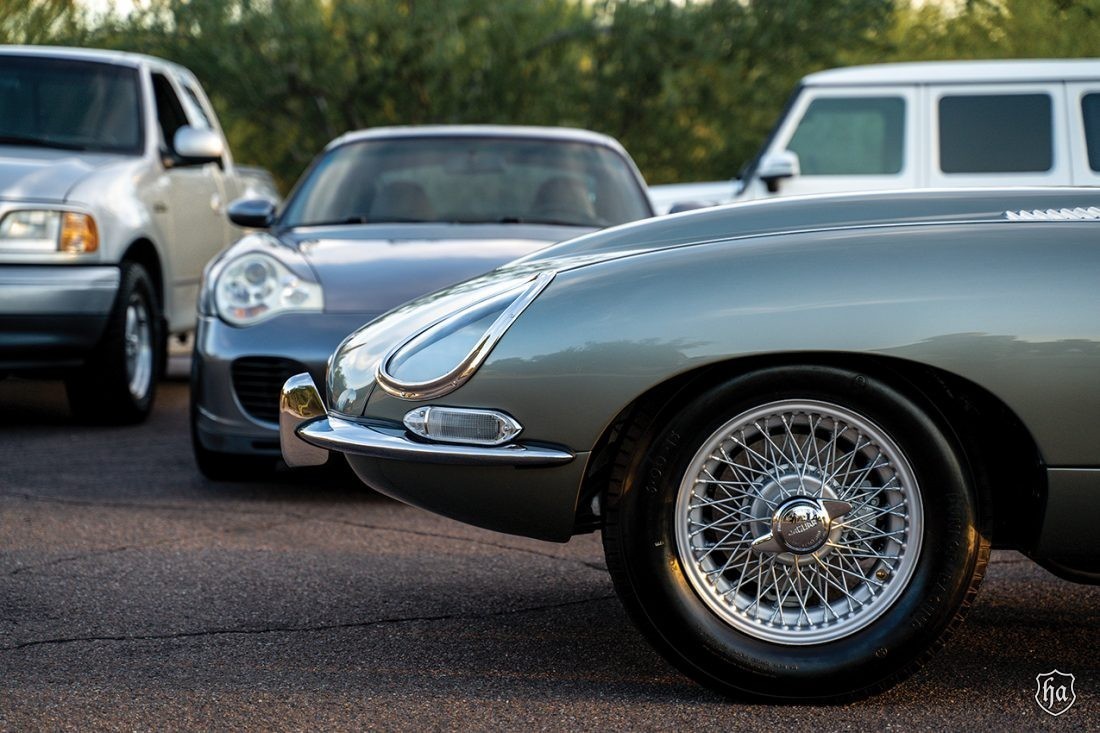 Four years later, after his parents moved the family to Long Island, they went car shopping. “At a Ford dealer looking at everyday sedans, I heard a rumble in the lot,” he recalls. “A 427 Cobra just got delivered, and I remember the rumble going through me.”

He never forgot that shake, rattle and roll: “I knew I would have to have one.” He did, in 1998, and he raced the Cobra throughout the country. “Realizing that this was a dangerous car and a dangerous hobby, I decided to be a little safer and buy the Burton Winston Cup car that is now for sale.”

Lesli saw the danger, too. 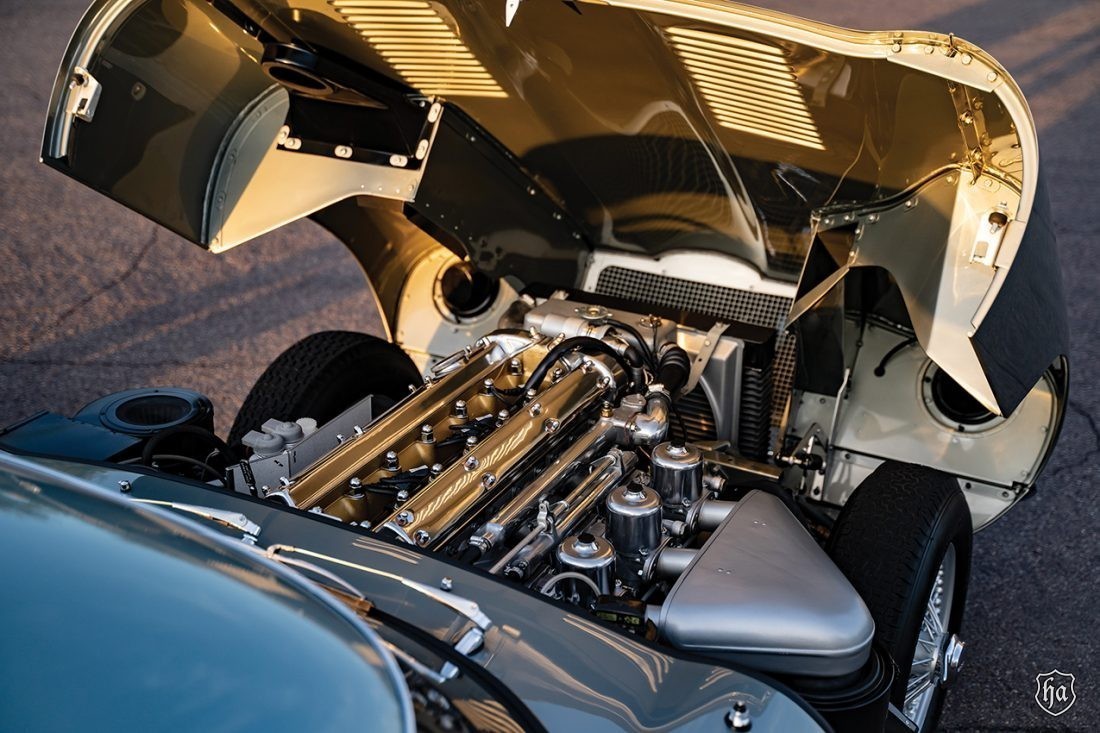 When he was doing more racing than he does now, she would be in the pit before he went out for the first race. She’d ask one question, he recalls: “Did you pay the premium on the life insurance?” He always replied “yes.” And she said, “Good, go faster, I want to see better lap times!”

Simply Obsessed
Since his early days, Sunshine “was obsessed with cars and knew every one that passed by.” He started tinkering when he was 15. “I learned how to tune them, pull motors and gear boxes and generally get dirty. We did street racing even before I got a license.”

Without a break, this has stayed with him. “I’ve built them, raced them, fabricated parts for them, bought, sold, brokered them, and stayed married through all of it,” he says. He met Lesli on a blind date in New York City in 1990, three decades ago this year. 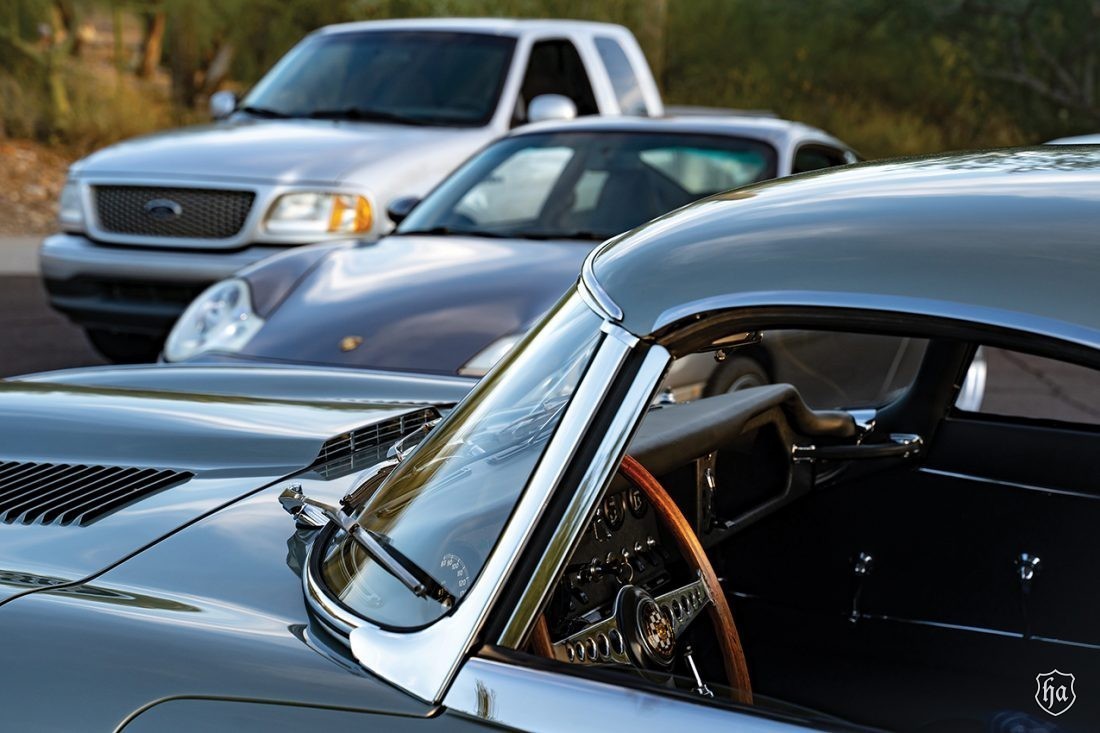 His first ride was dad’s 1965 Oldsmobile 98 LS sedan, with the 425-cid four-barrel engine. On Long Island, dad would park the division’s flagship at the train station and leave the keys under the mat. “I used to take the car at age 15, no license, nothing. I’d smoke a cigarette to look older and go drag racing. Then, I put the car back at the station.

“Sometimes I didn’t get the same spot, and he would come home saying, ‘I must be working too hard. I couldn’t find my car at first when I got off the train.’ I think he knew, but we never talked about it.”

Sunshine graduated from Suffolk University in Boston in 1978 with a criminology degree. “I learned how to stay out of jail,” he notes, chuckling. 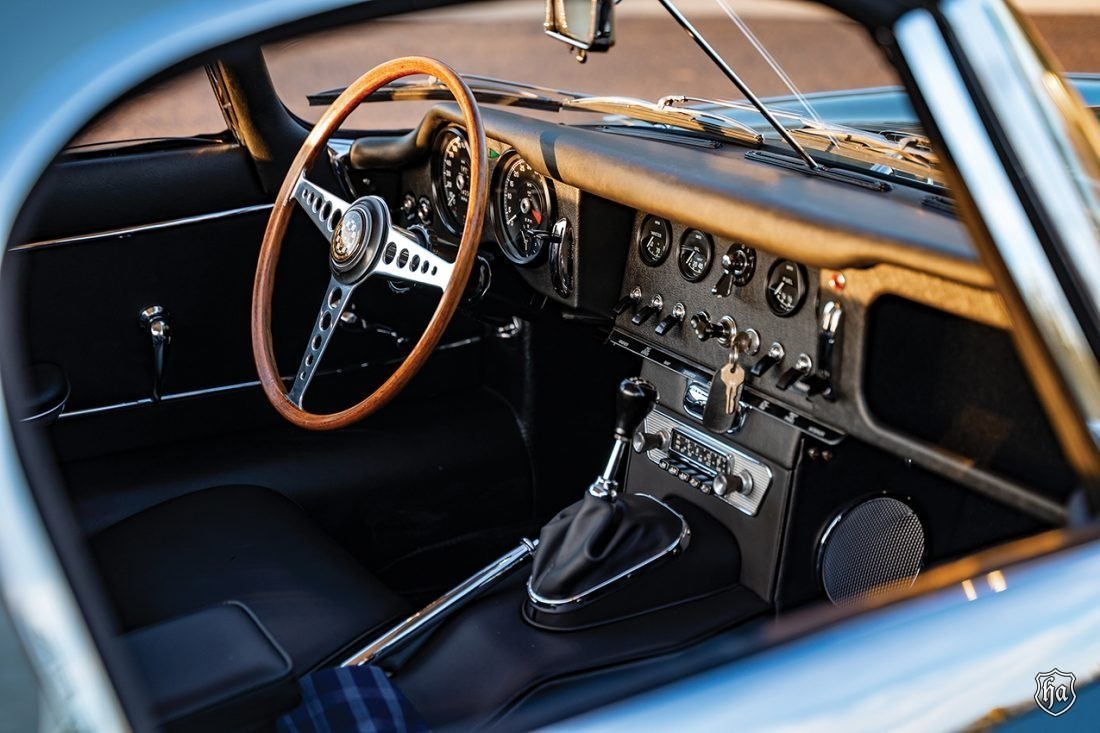 Since 1979, he’s been collecting, buying and selling some of the world’s’ most important sport and race cars of the 1950s and 60s, focusing on the Shelby Cobra, Ferrari and Jaguar. His largest sale was a numbers-matching $28-million 1958 Ferrari 250 Testa Rossa (stevesunshineclassic cars.com).

In 1981, he started collecting with a 1963 340-horsepower solid-lifter Corvette, Sebring Silver on black interior. “It was also my last Corvette, a neat car, but I got bit by the Cobra bug, and it was full steam ahead into Shelby Cobras after that.

“The cars I collect I love to look at and drive,” he explains. “They bring me back to a place and time.” 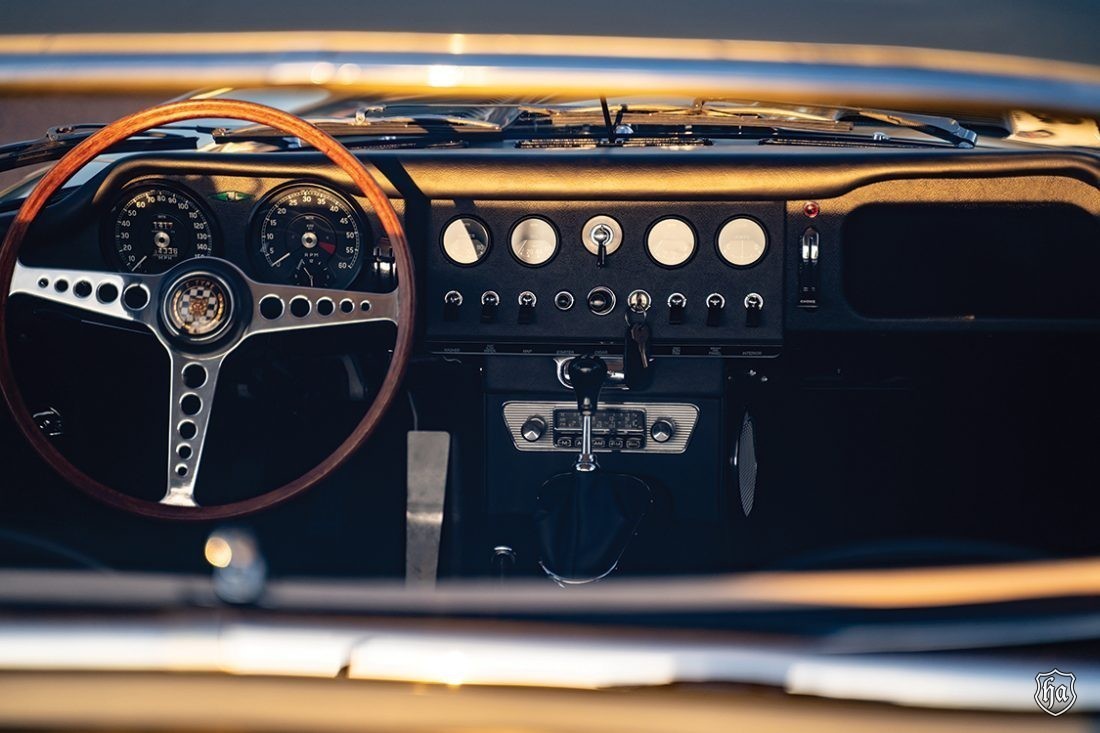 He’s not a “car show” guy although he is a staple at all the major concours. More importantly, it’s the seat experience, each time different, even in the same car, at races. “When I get in a car, my world turns to black and white. No radios, nothing but me and machine. I visualize the rotating assembly of the motor running. When asked why I don’t bring them to more shows, I usually say, ‘My car show is in my garage and on the highway.’”

Shining in the Sunshine

Here are some of those places and times: 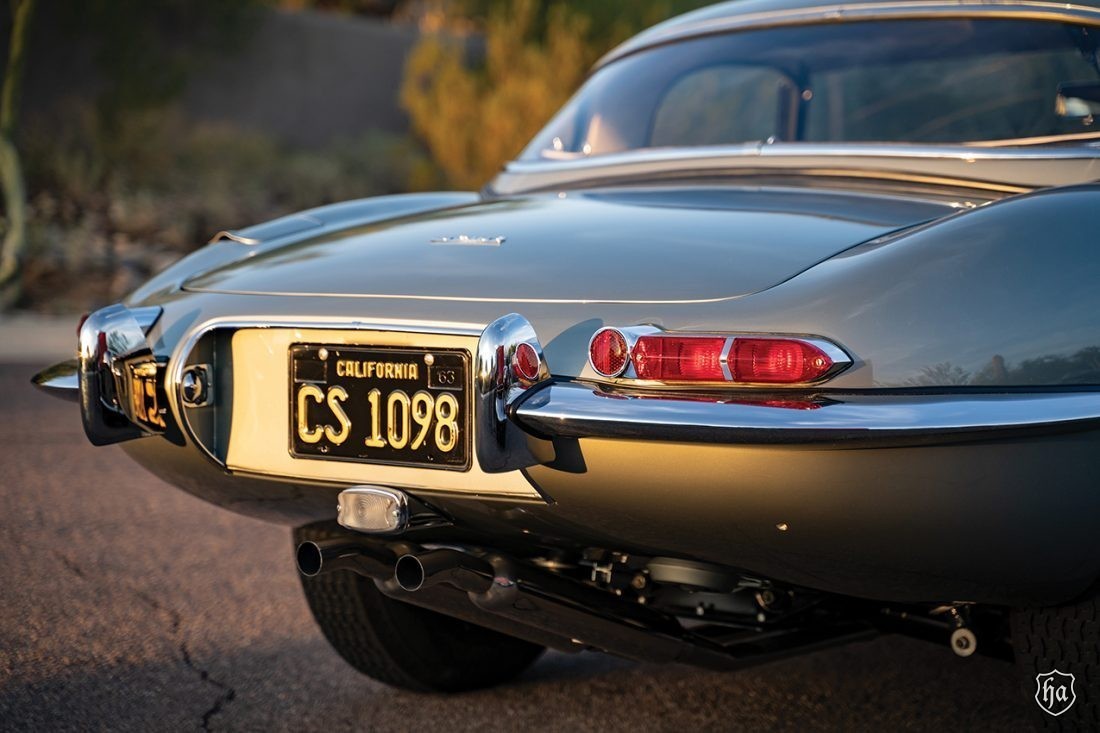 •1954 Jaguar XK 120 “SE” –– This is a previously one-family-owned car with the original paint, Birch Grey on Red, paperwork, including the tags, bill of sale and original cancelled check.

As an “SE,” the classic Jag delivers 180 horsepower from its flat-6 engine (stock was 160 horses) and has dual exhausts instead of the basic single.

An Indianapolis man, Robert Koschnick, purchased it from the well-known Max Hoffman Car Company in Chicago on September 18, 1954, for $3,445, a substantial amount of money for a car then. 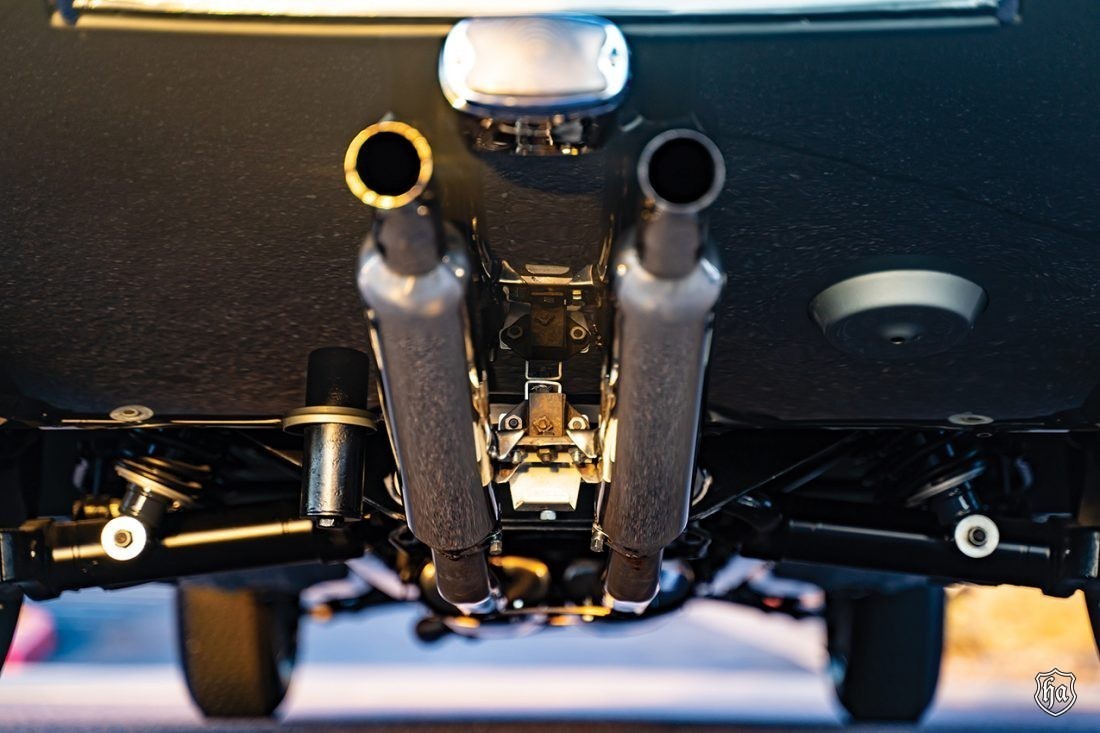 “It remained in the family until 2012, when I purchased it at the Gooding Monterey Auction,” Sunshine says. He’s had it since.

With just beyond 61,000 miles, the Jag has an “actual mileage” title and has never been raced. He took it to the first Arizona Concours at the Arizona Biltmore in Phoenix, receiving a Preservation Class award.

One original dent remains in the rear driver’s side fender. “The owner was so upset, he banged it out himself. I decided to leave it as it is; it’s barely noticeable and a part of the car’s history.” 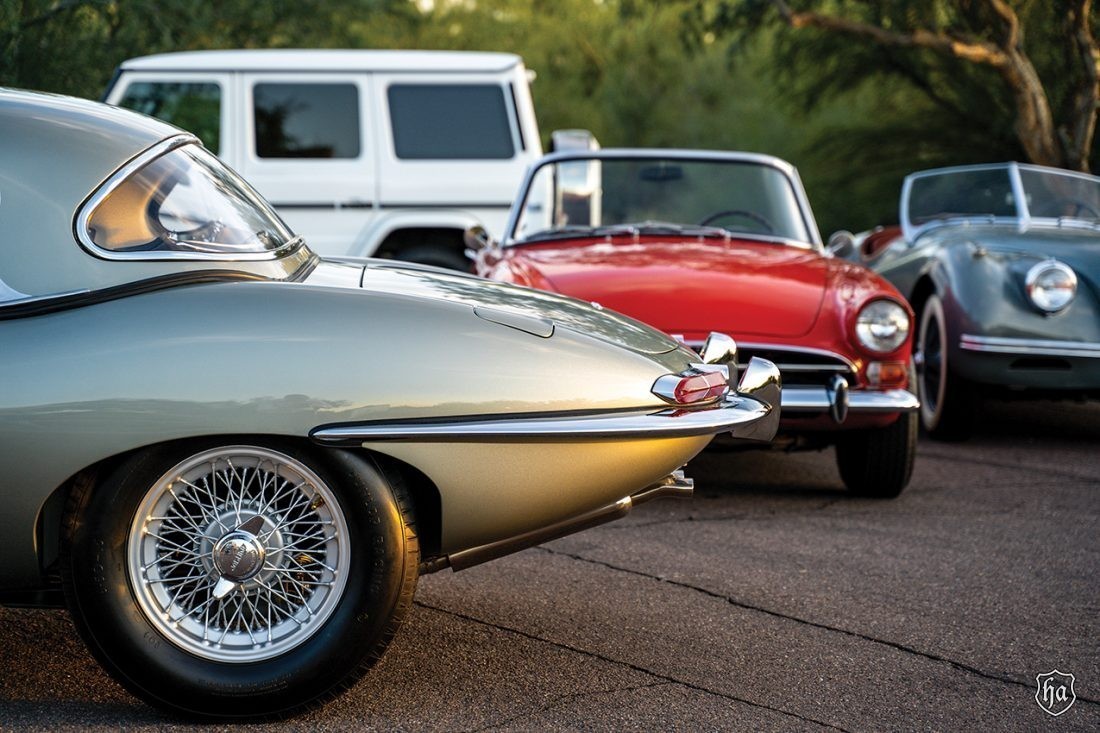 •1964 Sunbeam Mk1 Tiger –– This is a first-year production car, #460, purchased new by privateer racer Bob Spears and titled in his mother’s name. “I am restoring it back to original race configuration to compete again,” Sunshine says, noting it’s in California for body and paint.

Soon after purchasing the Tiger, Spears converted it to go racing. Sunshine has his license, log book, driving suit, helmet, and 1st-place SCCA trophies. “It’s probably the most documented race Tiger from a privateer in existence,” he says.

In the SCCA Regionals Bob placed 1st. In the SCCA National, Bob came in 3rd behind Bob Tullius and Bob Sharp. “That’s not bad for an amateur on a shoe-string budget,” Sunshine says. 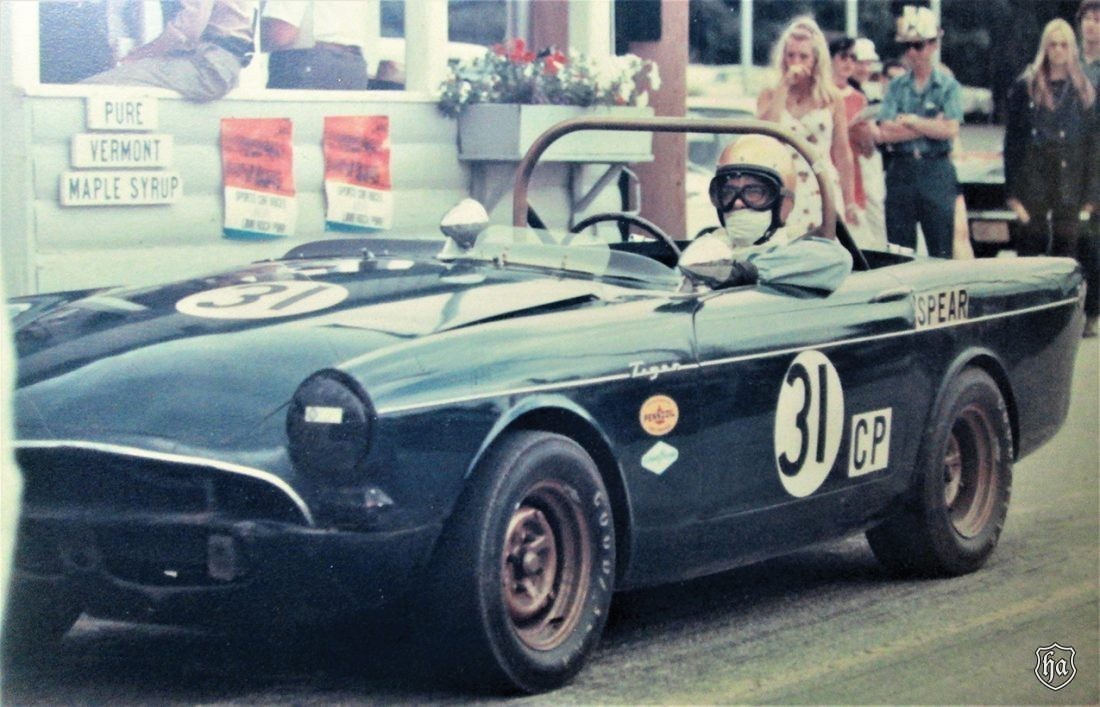 •1967 Sunbeam Tiger –– This authenticated 23,000-mile survivor has the original red paint, and Sunshine has the bill of sale and paperwork.

The MK1-A has the original 260-cubic-inch Ford V-8 with a two-barrel carb; this has never been out of the car. “I spoke with the original owner, and he said he liked the rare magnesium Halibrand Wheels and had the dealer put them on after he agreed to buy the car.”

This is the same color combo as the car in the vintage television series Get Smart; it was driven by agent Maxwell Smart (he wasn’t), smartly played by Don Adams. Every opening segment, he jumps out of the Sunbeam to meet with “Chief” about his next assignment, paired with Agent 99, the statuesque Barbara Feldon, who inexplicably loves the bumbling Agent 86. Maybe it was his Tiger. 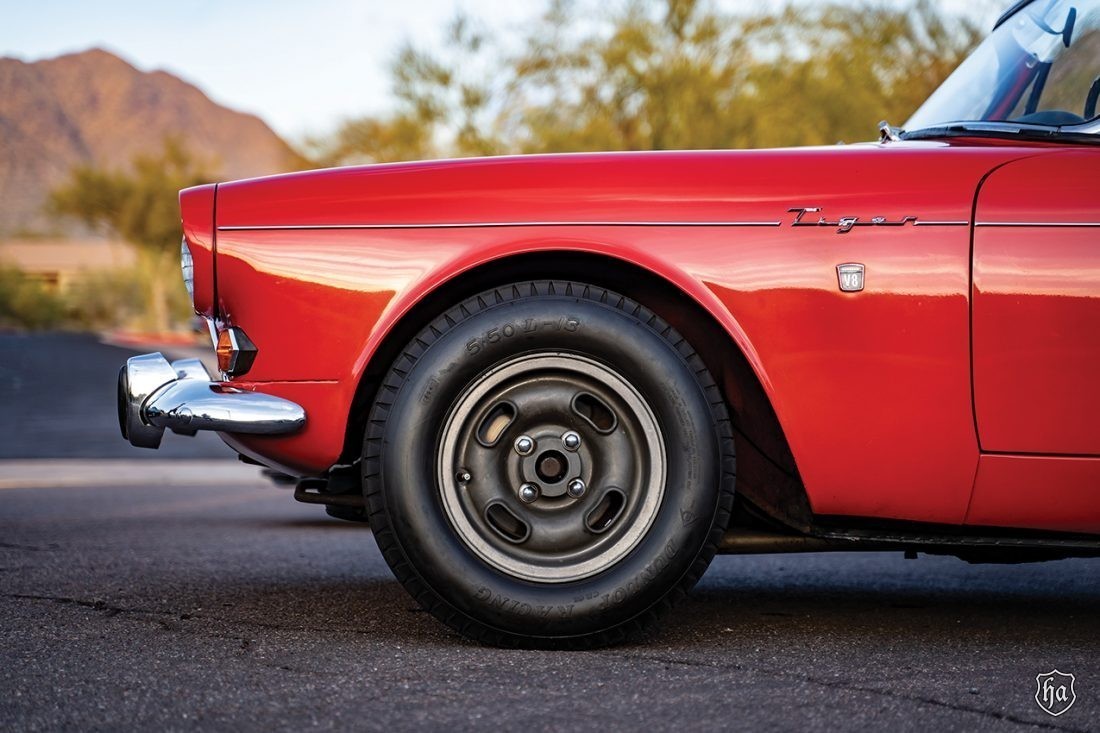 The original sale consummated August 31, 1968, for $3,200. Sunshine found it listed on eBay in Florida. “When it didn’t sell, I went to see it and could not leave without it.”

•1961 Jaguar E-Type Coupe –– “I was in love with the E-Type Coupe ever since it came out in 1961. I had the Matchbox, the plastic models, the magazines and anything related to it as a child.”

His parents were not wealthy, so a new one was not possible. 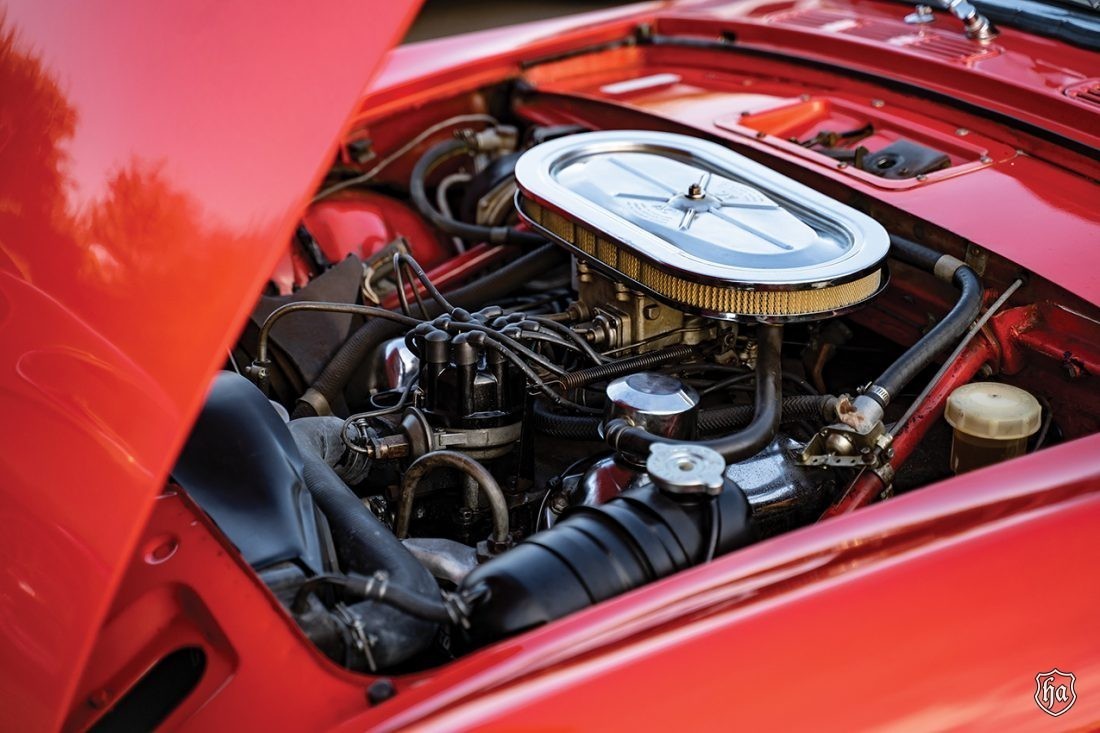 “But, my mother said if I made a good college, circa 1972, she would buy me a used Jaguar coupe as my going-away present. Just prior to that, my father received a ‘stock tip’ from a neighbor, and he lost all of our money. Of course, I never got the car and had to wait.”

“I knew this was going to be a gamble if I bought it as I only had two days to bid. I ended up losing the car to a higher bidder, but I sent a message to the buyer, which you could do in the early years of eBay, and it turned out to be a dealer I knew. He said he would make me a deal. 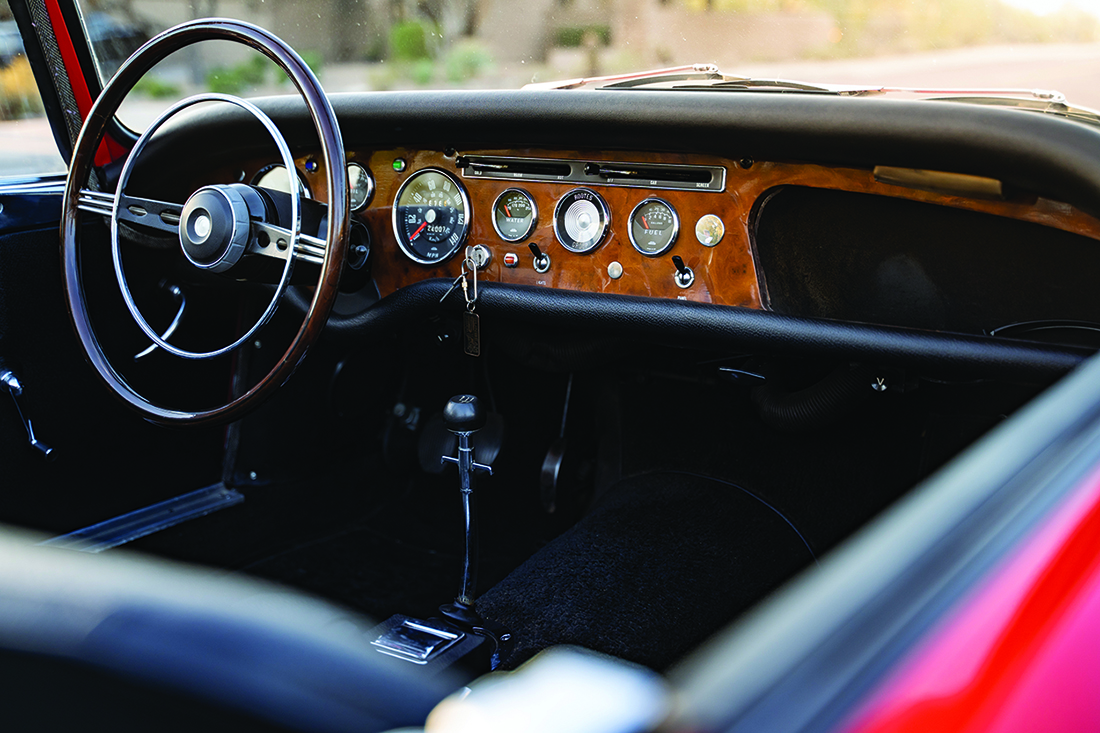 “He was on the West coast, I was on the East and had to send his driver to pick it up in the middle and then head to the East coast to pick up an additional car. The deal was, he would let his driver bring me the car to inspect for $1,000. If I didn’t like the car, I lose the $1,000 for the look-see. If I did like it, I could have it for $x profit to him over the eBay auction and I get free shipping. Deal.”

The car was better than he expected. “Knowing the story with all the emotions attached, Lesli bought me the car,” he says. “It was not only my greatest birthday present but the only car that will never be for sale.”

It was first purchased as one of the first 1961 coupes to arrive in California by Sidney Rosenberg, who owned American Building Maintenance, a company founded in 1909 by his father. Rosenberg was also a co-owner of the San Francisco Giants. 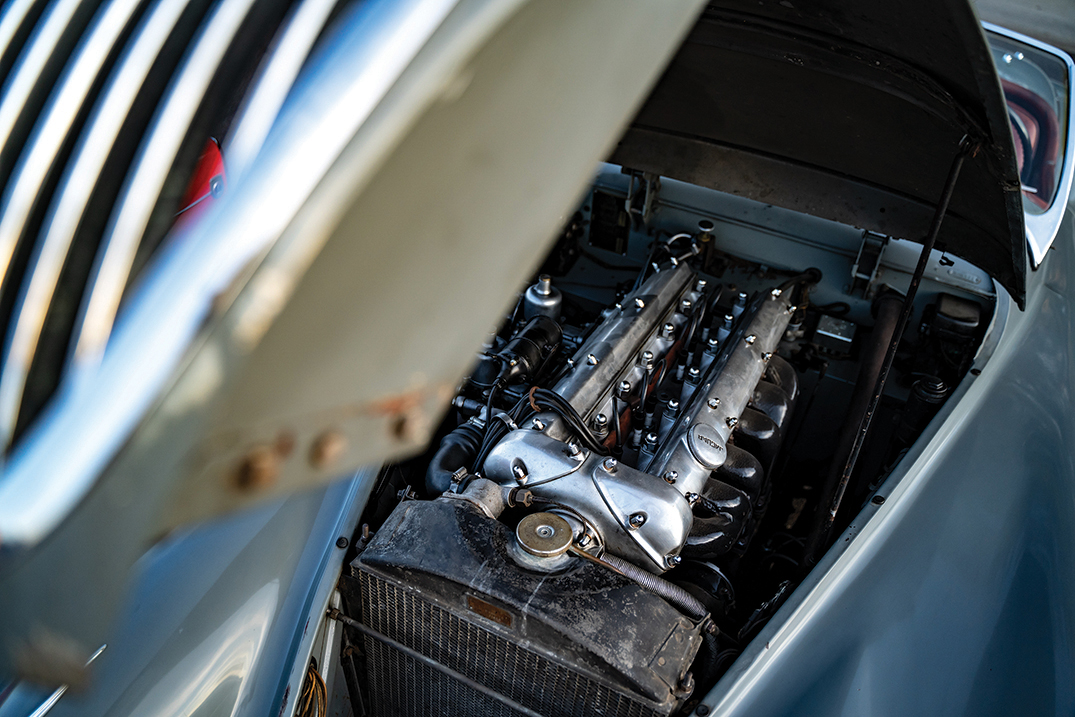 He drove the car until about 1963 for 18,000 or so miles, and then the car went up on blocks until 1978. Rosenberg’s friend, Bob McIntyre, purchased it and commissioned a well-known Jag restorer to bring it back to new. It won 1st place at the Newport Concours in 1992 and was later showed at the first New York City Concours d’Elegance in Central Park in 2005.

The Jag has never been raced. The 35,000-mile original engine is being refreshed. Sunshine: “Great paperwork, great story; the motor’s out but even then it’s incredible to look at.”

•1964 E-Type Roadster –– The show car includes the rare hard top and factory competition wire wheels. Just finished, this was a one-owner car purchased from the original family. Sunshine showed it at the most recent Quail event in California.

The car was purchased from the son of the original purchaser; he wasn’t a car guy. Sunshine commissioned a new painter in Pennsylvania to do the body and the paint, Matthew Zielenback of Convenience Collision. “He is just amazing. No one can believe how incredible this car came out,” he says. “I think this is the best one in the world.”

•Jeff Burton’s NASCAR 1994 Rookie-of-the-Year-winning Raybestos Ford T-Bird –– The car was used in the two Winston Cup races that year by Burton, who competed for Stavola Brothers Racing Team of New Jersey. It’s a full NASCAR-spec 358-cubic-inch Ford Motor with a Jerico 4-speed gearbox. “In 1994 the horsepower was about 750. With today’s builds you get more,” Sunshine says.

In 2007 or so, he sold the car to Valley resident, racer and real estate agent Mark Furcini and is selling it for him. In 2009, Furcini found Sunshine his second home in Scottsdale. He and Lesli moved permanently in July of 2018. “We love it in Arizona,” he says. “And, no, I don’t get hot in the summer.” 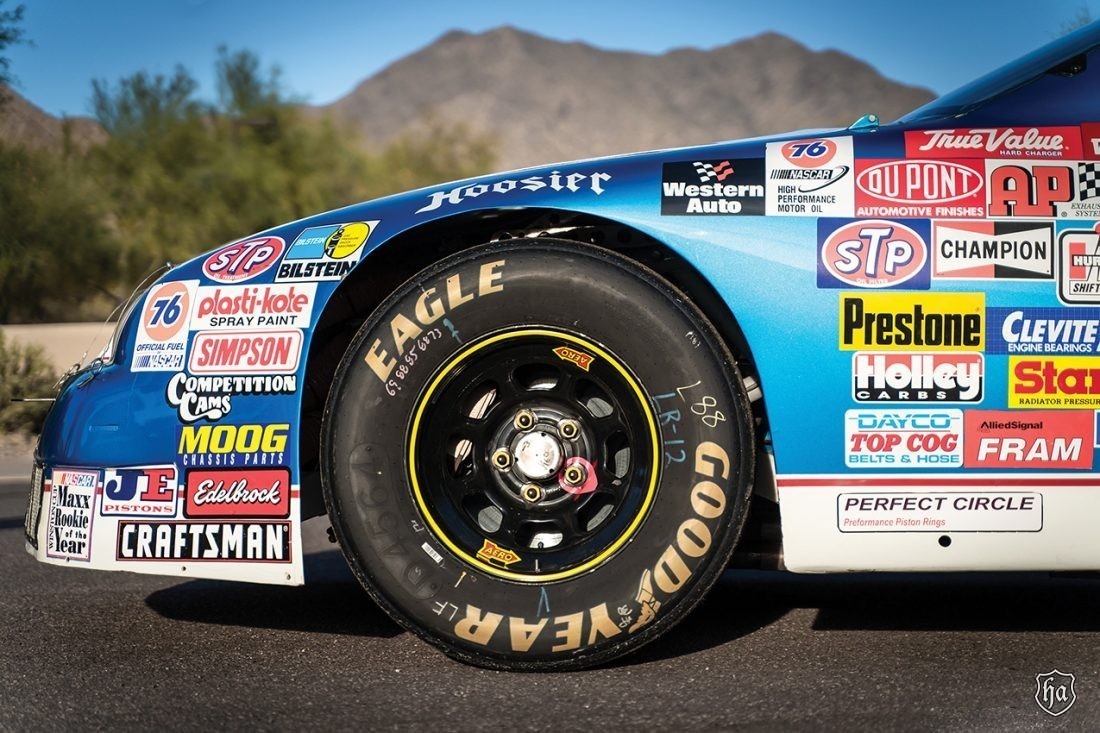 If you or someone you know has a GreatGarage and would like it to be considered for an upcoming issue, please e-mail us at info@highline-autos.com. 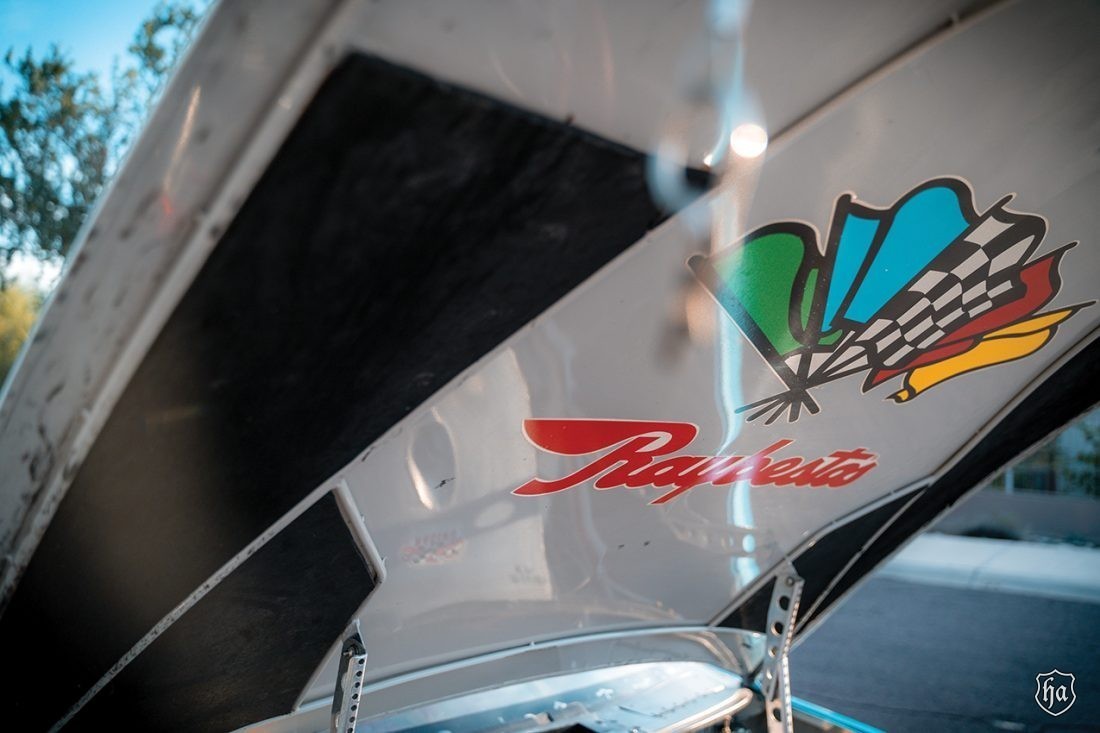 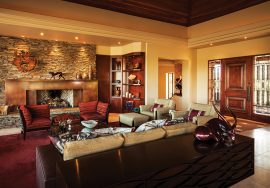 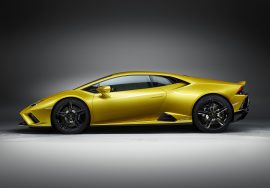 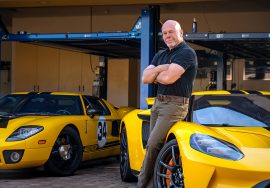 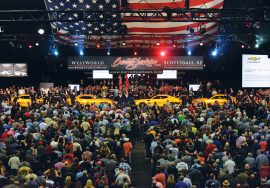