Documented in 2016 as the world’s largest motorcycle museum by Guinness World Records, the venue has 1,606 motorcycles, 118 cars (64 of these Lotus classics), although this changes daily, says Lee L. Woehle, the museum’s archivist. Last year, the museum and park hosted 368,000 visitors, including more than 3,000 from other countries.

After 63 first-place wins, Barber continued his success as a business executive. In 1989, he revived his motorsports passion by collecting and restoring classic cars.

Because great car collections had already been established, he listened to longtime friend Dave Hooper, a motorcycle enthusiast who ran Barber’s delivery fleet for 27 years. “He suggested that Barber shift his focus from cars to motorcycles and create a museum which reflected the history of motorcycles around the world,” Woehle explains.

“He wanted to preserve motorcycle history in the United States in a way that represents an international aspect and to supply an example of motorcycles that until then could only have been seen in books and magazines,” she adds. “So he set about building the world’s ‘best and largest’ motorcycle collection.”

Hooper assisted two years later, in 1991, gifting him two bikes from his collection, including a rare, beautifully detailed 1952 Victoria Bergmeister. “Enjoying the Bergmeister’s beauty, he appreciated motorcycles for much more than just fast machines,” Woehle says. “They were also works of art.”

Barber hadn’t forgotten about his racing passion. In 1992, The Barber Racing Team competed in the American Historic Racing Motorcycle Association (AHRMA) series in in Daytona. The team won premier races and competed in the U.S. and Europe until 1998, bringing seven national championships back home.

As a 501(c)3 tax-exempt private operating foundation, the museum opened to the public in March 1995 at its original Southside Birmingham location. Here, the Barber staff conserved or restored motorcycles to running condition, and, in some cases, to competition-ready shape. This location remained open until November 2002.
In 1998, New York’s famed Guggenheim Museum requested 21 bikes for exhibit at its “The Art of the Motorcycle,” which also traveled to the Field Museum in Chicago and the Guggenheim in Bilbao, Spain. Barber said, “We can do this in Birmingham!” He imagined a one-of-a-kind facility with a road course where his collection could be demonstrated.

England’s Goodwood Festival of Speed has featured cars from the Barber collection, and the museum has shown motorcycles twice at Pebble Beach, winning a first-place trophy both times. And recently, the museum loaned motorcycles to the QAGMO (Queensland Art Gallery of Modern Art) Show, “The Motorcycle Design, Art, Desire.”

In 2003, Barber acquired an 880-acre property in Birmingham, consulting with world champion racers John Surtees and Dan Gurney and others about the design. On September 19, 2003, the museum opened, including a 16-turn, 2.38 mile racetrack and motorcycles that span 100-plus years of production. More than 1,000 bikes can be seen on any day, and 220 different manufacturers from 22 countries are represented in the collection: Harley-Davidson, Honda, Indian, Showa, DSK and Cagiva.

The park is also home to the Porsche Driving Experience, and automakers have used it to stage vehicle debuts and film commercials. In addition, restorations are done in-house; all of the vehicles are operable, and every day examples are demonstrated on the track.

The Barber Proving Grounds was built in 2014 next to the racetrack; it consists of a track area, which can be converted to various layouts and a wet/dry skidpad. The proving grounds allow users to demonstrate vehicle capabilities such as accident avoidance, braking, turning and acceleration. Mercedes-Benz began using the grounds for their employees’ “Brand Immersion Experience” in October, and other companies book the area for product debuts, kart racing, driving schools and safety instruction.

Woehle explains that the museum’s earliest motorcycle is a 1902 Steffey and the earliest car a 1923 Ford Model T. The most recent vehicles are a 2021 MV Agusta Super Veloce motorcycle and a 2016 Porsche 918.

The earliest acquired by Barber is a 1953 Victoria Bergmeister motorcycle and a 1958 Chevrolet Impala Bel Air. The most recent acquisitions: a 1987 RADD MC² motorcycle and a 1965 Brabham BT8 automobile.
The museum features perhaps the world’s most extensive Lotus collection, anchored by the Lotus 21. The museum also displays rare racecars, including the 1964 Ferrari F-158, in which John Surtees won the 1964 Formula 1 Driver’s World Championship. 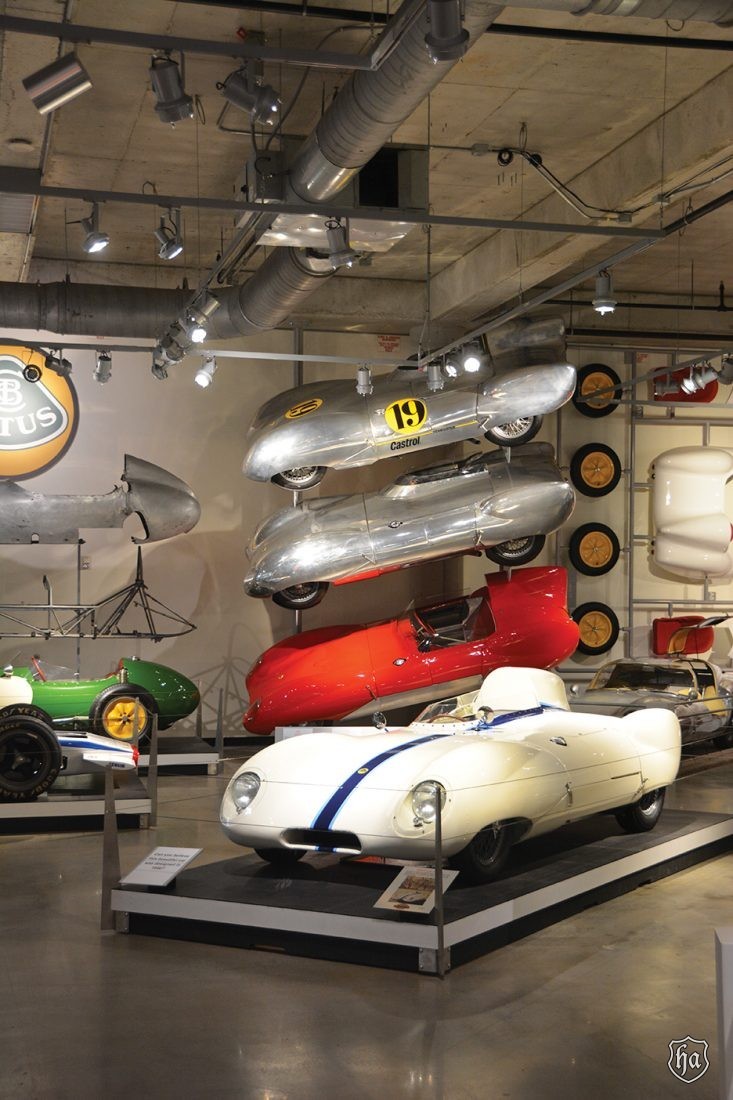 Motorcycles from 1902 to current-year production are displayed from 22 countries representing 220 marques from the everyday street bike to one-off Gran Prix race machinery. “Bikes have been purchased from as far away as Australia, New Zealand and Sweden but also as near as down the street,” Woehle says.

For Highline Autos, Woehle selected and described four examples in the museum:

•1964 Ferrari F1 Type 158 –– “John Surtees won the 1964 drivers World Championship with this car. Unlike today, as teams build and use up to six cars per driver, John scored most of his top finishes with this particular car. The championship went down to the wire, with John clinching the title at the last race in Mexico.

The semi- monocoque chassis, with the 1500cc V-8 cradled in the rear portion, was Ferrari’s answer to the advanced Lotus 25 of 1963; previous Ferrari’s used the more traditional tubular space frame. The direct injection was unusual for the period, being an adaptation of the system used so successfully by Mercedes Benz on the Le Mans cars.”

•1948 Lotus Mark I “Replica” –– “The original Lotus Mk 1 was built by a very young group of Colin Chapman’s early friends in a garage behind his girlfriend’s and later wife’s house. In post-war Britain, supplies were still very scarce, so an inventive Chapman built his first special from an old used car, a 1930’s Austin 7, that he was unable to sell.
“The British motor sports industry, now dominant in many forms of racing, got its start with this type of special-bodied modified cars used for various types of competition. It was built to compete in off-road trials held in the muddy countryside. Unlike today, the ‘competition car’ was also driven to the track, not towed on a trailer. Note the pockets in the back compartment. They were to transport a pair of rear wheels shod with knobby tires to be used in off-road competition.”

•1996 Britten V-1000 –– “Words cannot describe what a small team of talented engineers in New Zealand have achieved in creating this machine. The Britten is novel, an original design setting new trends in chassis and suspension technology.

“John Britten, the team leader and chief designer, passed away in late 1995. He built only ten machines; this one is number seven. Britten won the world British, European and American Racing Series (BEARS) in 1995 and had many successes on the racetrack.”

▪1954 AJS E95 –– “Introduced in 1952, the E95 was a much-redesigned version of the E90 horizontal twin, which was known as the “Porcupine” due to the spiky finning on the cylinder head. The original design was drawn pre-WWII when supercharging was legal; when racing resumed in the 1940s, however, supercharging was banned, and the Porcupine was uncompetitive. The power unit was redesigned to be normally aspirated, and the cylinders were given a 45-degree angle to shorten the wheelbase to improve handling. While fast, the E-95 was not reliable, so factory involvement in the Grand Prix was discontinued.”

The museum is open Monday–Saturday, 10 a.m.–5 p.m. CST and noon–5 p.m. Sunday. For adults, admission is $15, children 4–12 $11 (plus tax). For more information, see barbermuseum.org or call 205.699.7275. If you or someone you know has a GreatGarage and would like it to be considered for an upcoming issue, please email us at info@highline-autos.com.

The new Mercedes-AMG SL: The new edition of an icon