Mike Lovell’s dad, Ellis, saved his son’s elementary school notebooks from his native Cleveland; in them the Phoenix resident and businessman scribbled “’69 Camaro SS396” hundreds of times after he saw one for the first time. This was the third year for Chevrolet’s response to the Ford Mustang released four and a half years prior.

Today, and almost every day, Lovell ogles his own ’69 Camaro as part of what he understatedly calls his “blue collar collection” of vintage and contemporary cars and motorcycles –– a 10,000-square-foot standalone dream car barn on six acres along the south side of Camelback Mountain in Phoenix. “I spend a ton of time here,” he says. 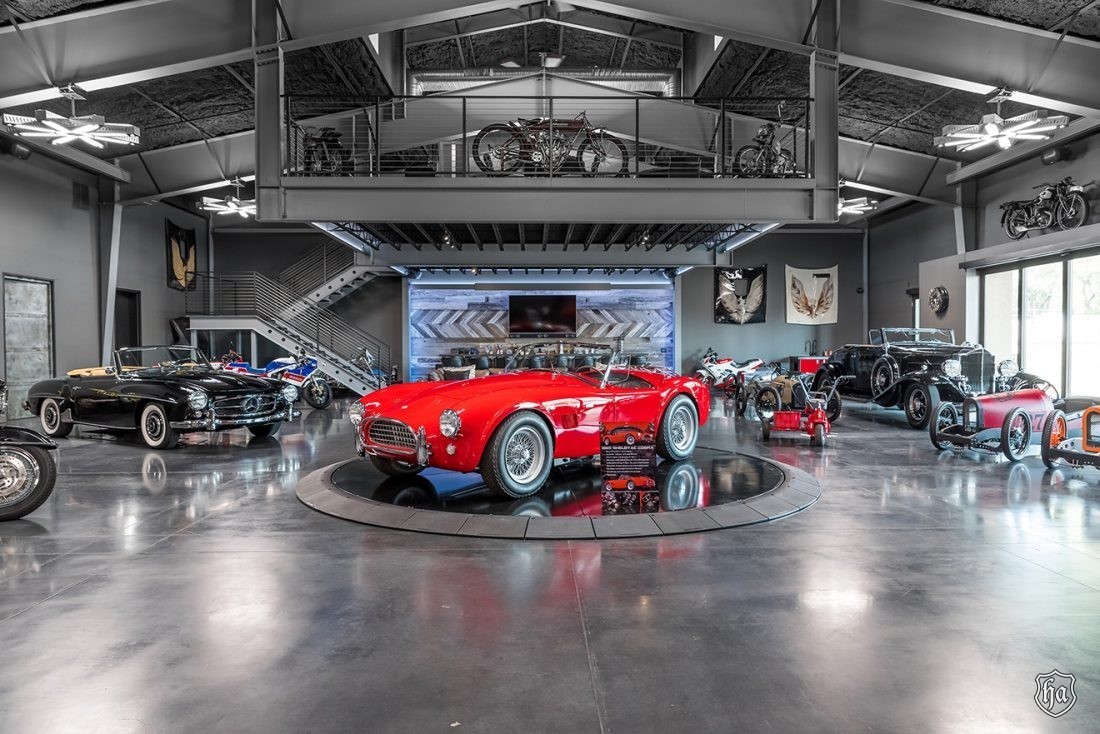 Visioned by Lovell, the luxe man cave was built by Phoenix luxury home specialist, Joe Hendricks, with an interior designed by Raegan Ford Interior Design, Scottsdale. Cole Bailes, owner of Carspitality, is responsible for keeping the collection shined and detailed.

“I keep 15–20 cars at my museum at any given time as well as about 50-plus motorcycles, mini-bikes, go-karts and other rides,” explains Lovell, who moved to the Valley in 1992 to attend ASU.

The eclectic collection includes his oldest car, a rare 1932 Packard, two restored Camaros –– his first car, a ’67, and the ’69 –– and the newest, a 2014 1,800-mile Aston Martin Vanquish he bought for his wife, Stacy, who doesn’t drive the behemoth performer very often, preferring riding as a passenger. 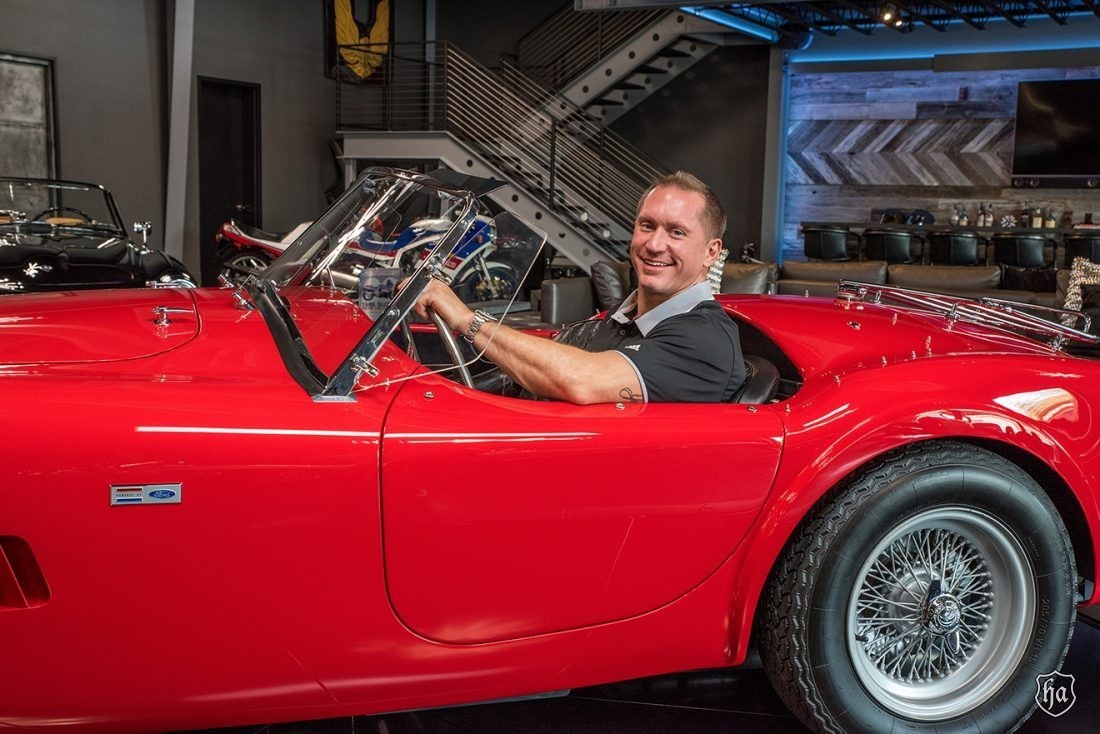 “I grew up with vintage cars in the garage, in a family of car collectors/restorers, including my dad and my older brother, so I’ve been actively restoring cars my whole life,” says Lovell, adding that he attended NCRS shows as a boy, where his dad regularly judged. “It’s in the blood.”

He collects eclectically, rides he enjoys. “Everything I own I love, everything I own, I own for a reason,” he says. “That could be a vintage pre-war car one day or a C3 Corvette the next. I don’t do this to achieve accolades or impress any specific car groups. I’m not trying to collect only this or that. It’s not a room full of Ferraris or McLarens. It’s a room full of cars I love and cars I drive regularly.”

Steel Trusses are a Big Plus

“Mike had a very clear vision of what he wanted. He wanted an epic garage to showcase his collection,” says Ford, whose full-service interior design firm has specialized in high-end residential projects for more than a decade. “He had never been able to house them under one roof, until now.” The garage was completed in November 2019.

“He envisioned a dark, sleek masculine environment that would be the perfect backdrop to highlight the dazzling colors of his vehicles,” she explains. “Mike requested that the living spaces be inviting and comfortable. The combination of rich leathers, rough-sawn woods and raw metals are what make this museum-quality garage an ultimate gentleman’s retreat.” 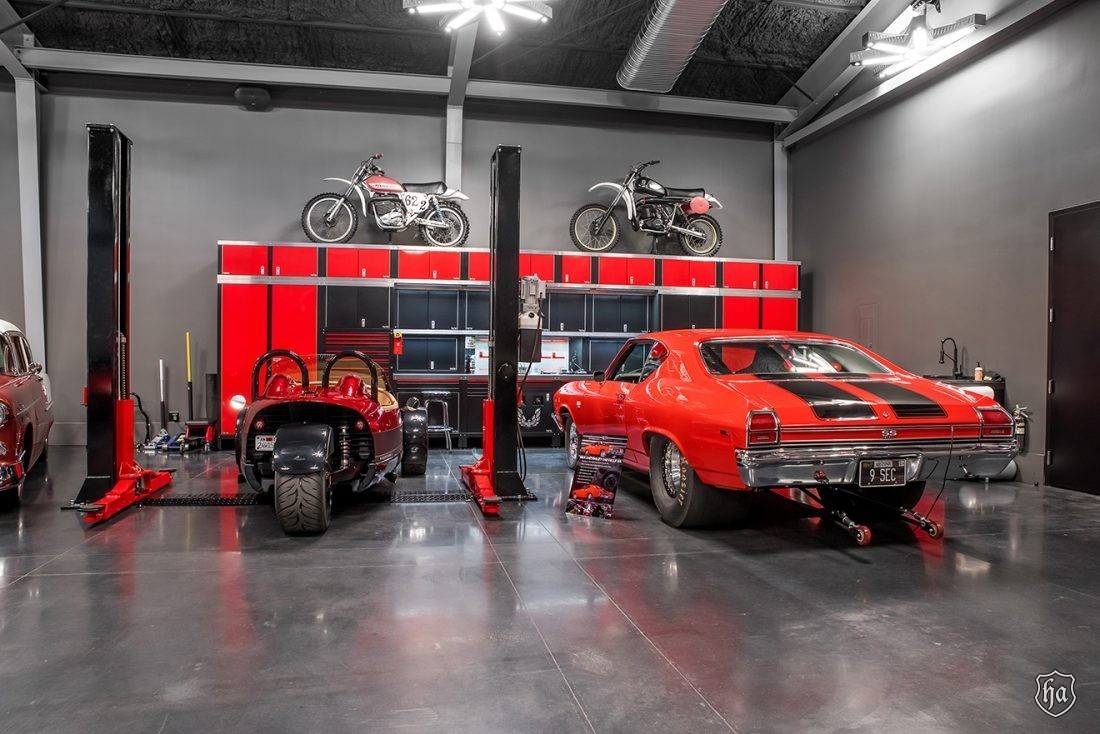 In this spirit, the garage has a modern industrial vibe with a fully exposed structure. The steel trusses eliminate columns, expanding the square footage for cars and motorcycles and facilitating flow-through for events. “On the trusses, we’re mounting mini-bikes riding toward each other,” Lovell says, pointing to the ceiling. “It’s just another feature that many people won’t notice, but when you look up and see bikes in the rafters, it will give a cool effect!”

With Hendricks, the builder, he reviewed the concepts and details for months and agreed on how to accommodate all of the cars on the acre lot. “The building started out as a garage but morphed into a museum,” says Hendricks.

“The overall design of the structure can be sourced back to a Midwest barn: tall walls, zero internal posts and clerestory windows, allowing for indirect natural light with no direct sunlight ever reaching the cars,” he explains. 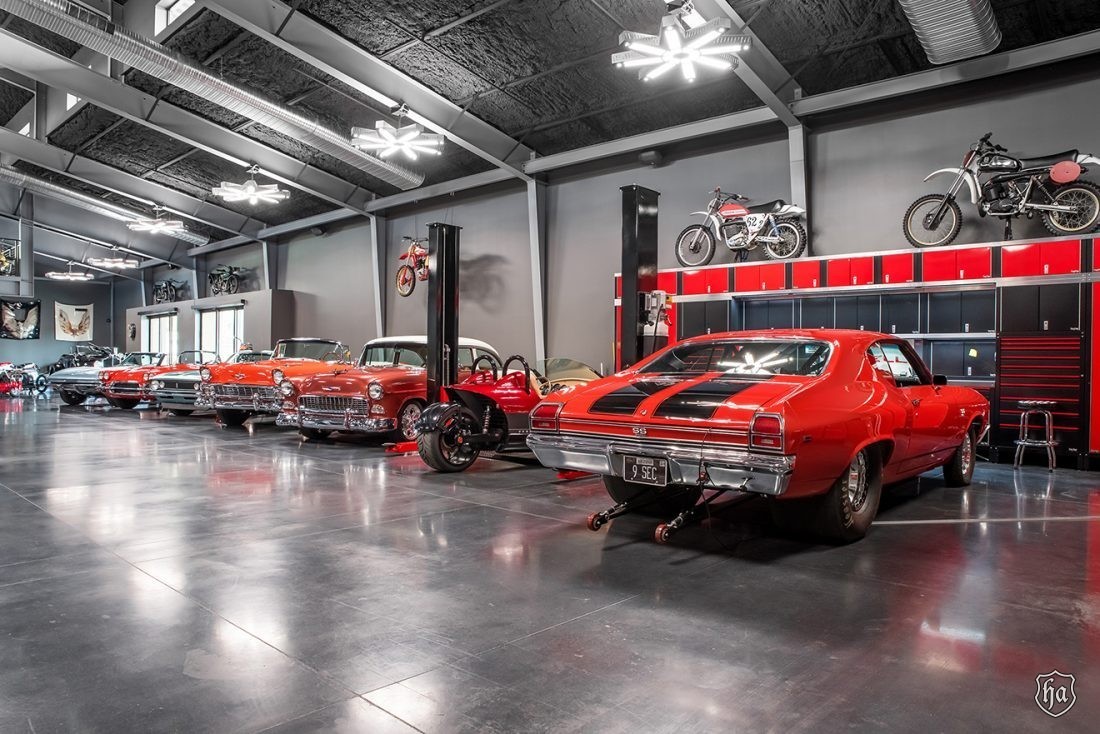 Ron Kotloff and his Mesa-based AEI Lighting team installed the custom lighting. That three-stage lighting includes dimmable up-lighting, spot lighting and flood lighting –– all in one fixture. In particular, the low lighting sends glimmers off the well-buffed collectibles to great effect.

Above the floor is a mezzanine, where Lovell relaxes, entertains, plays poker and looks over his collection. An air-filtering system keeps the space dust free and healthful.

He also wanted unusual items related to cars incorporated in the design, explains Ford. For instance, on the mezzanine and the ground level, the Weld House in Tempe fabricated metal tables from scrap-yard automotive pieces. In addition, the company sourced four 1970s/80s Pontiac Trans Am hoods with the signature Screaming Eagle decal from junk yards for the midnight-gray walls. “That’s why they’re dented and look a little beat up,” says Lovell. “Just to provide a finished look, each hood has been pinstriped on the edge.”

Below this level is a commercial-sized 20-foot-long steel and concrete bar, designed and fabricated by Josh Hawkins, principal of Hawkins Buildco, Phoenix. For the wall backing the bar, Hawkins found and placed reclaimed wood from a late-1800s tobacco barn in Virginia. 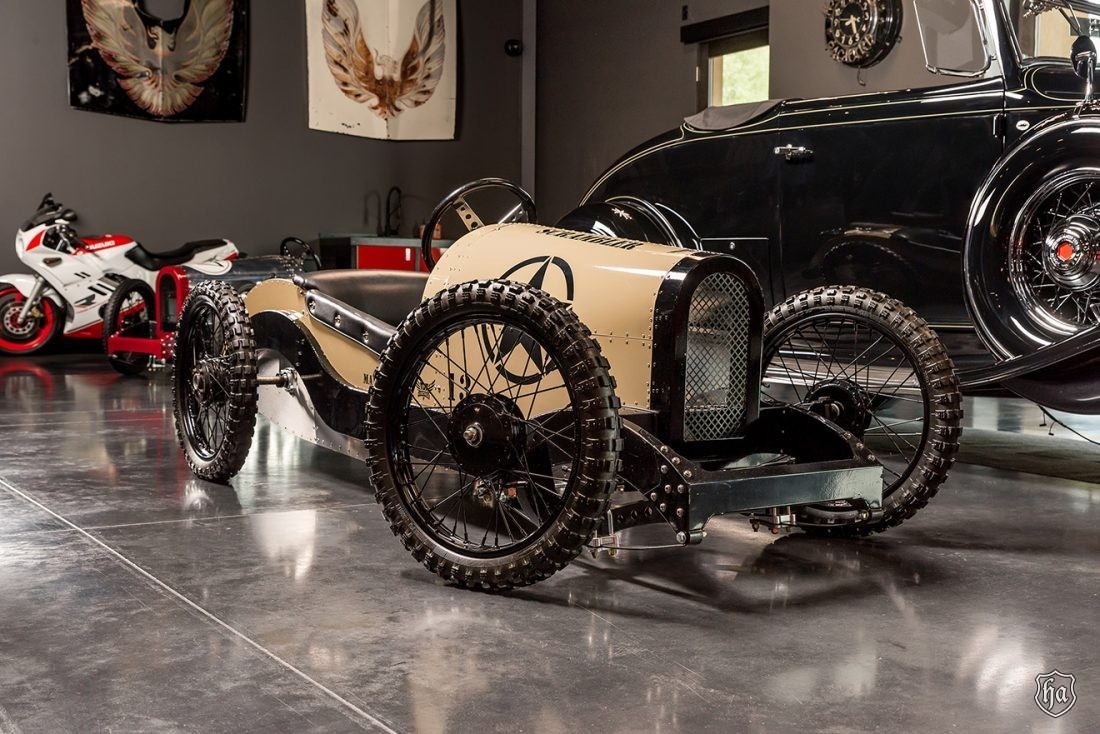 The cars are the life of the garage, but Lovell could live here, too. His man-kitchen incorporates a custom diamond-tread hood, which complements the red-lacquered cabinetry. Two bathrooms are in place, one with a steel pivot door, concrete trough sink, a modern industrial shower and the second finished with dark dimensional wall tile. Both feature images of classic cars printed on aluminum.

A bedroom completes the domestic component. After she saw the living quarters for the first time (the city required this to satisfy zoning), Stacy jokingly asked him, “Is there anything I should know?”

The couple live with their three children in a home on an additional two acres separated from the garage by mature oleanders. On the garage side of the hedge, Lovell had a world-class concrete skateboard park built for their oldest daughter, a top-ranked competitor. “We’ve had leading names in the sport visit us here. She crushes it every day out there,” says Lovell. 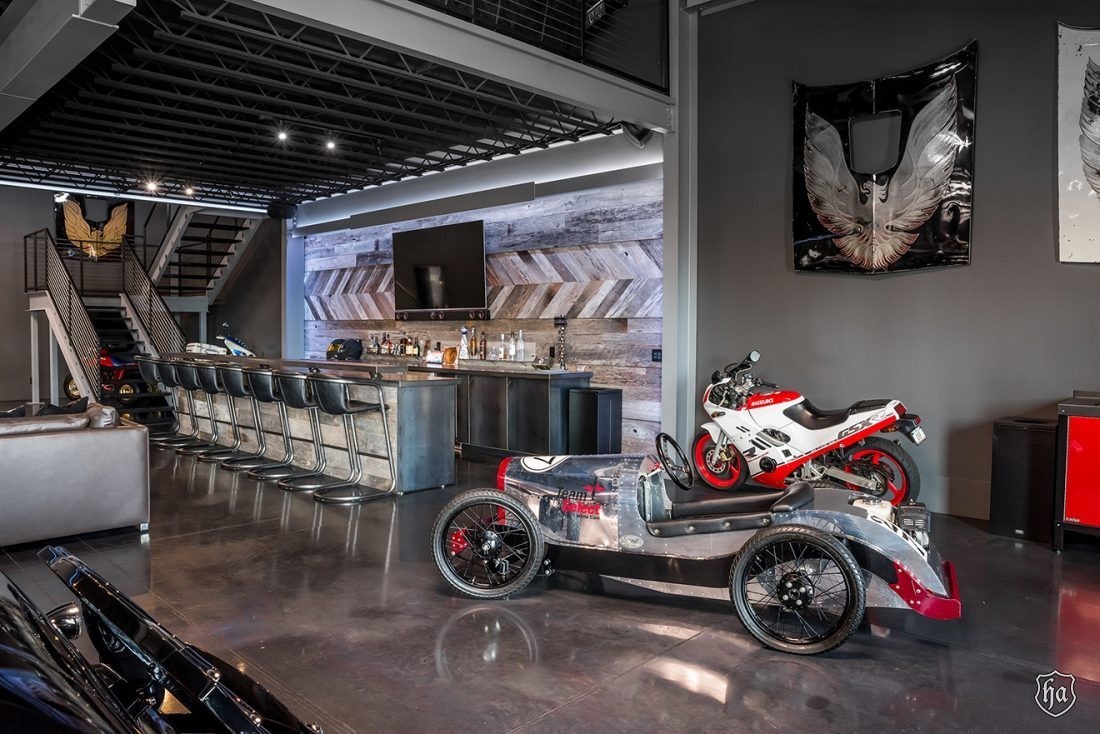 He has plans for another garage on the adjacent land: a miniature version of the “museum,” about 4,200 square feet, a shop where he, his dad and his children can repair and restore together in a dirty-shop environment.

Hats Off to a ’67 Camaro Ragtop

Lovell’s cars aren’t just for show or raised up on designer lifts, like worshipped gods. “I drive everything every month,” he says. 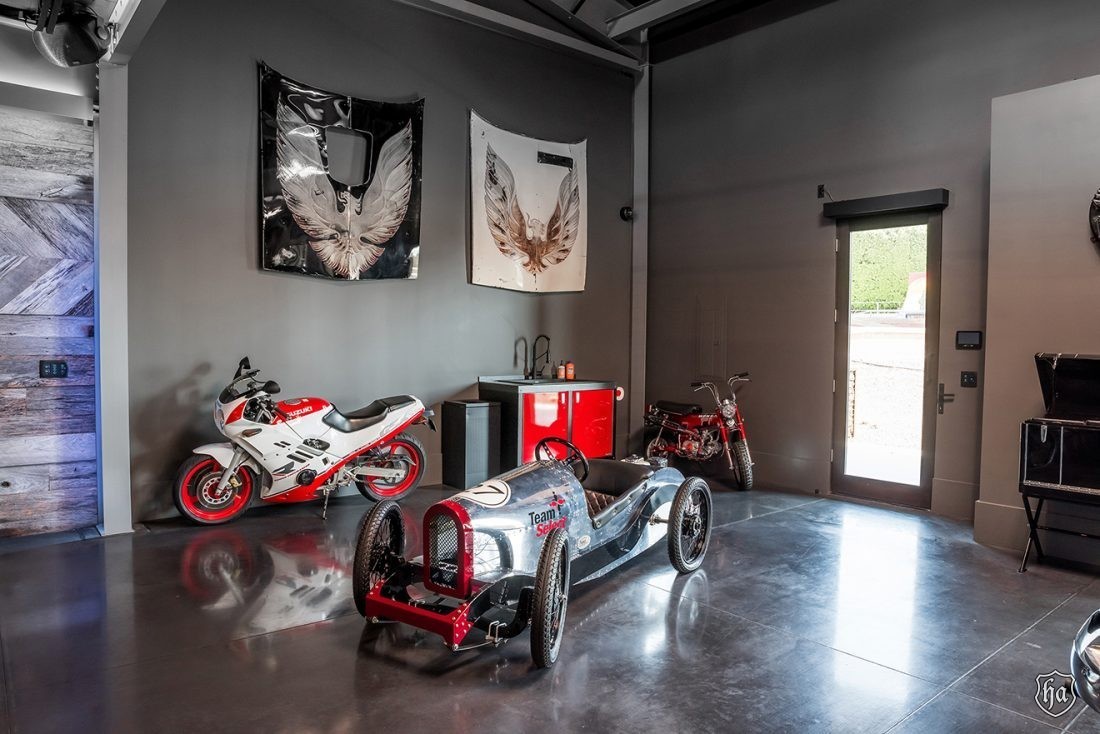 For example, he has two Hummers, one a first-year 1996, a 10,000-pound vehicle that came from the factory with an anemic 150-horsepower 350-cid engine. He’s installed a supercharged LT1 with methanol injection and four-inch exhaust; it puts out about 800 horsepower. An “outrageous interior” completes the build. When he takes off at green lights with a slight depression of the pedal, people stop him (if they can catch up) and ask, “‘What kind of Hummer is that’?”

The second is an original Hummer used by the military. “‘It’s a ton of fun. Guys come up to me at the gas pumps and tell me about their Hummer experiences in Iraq, like breaking frames jumping them in the desert.”

Here are some of his other moving pleasures:

•1967 Camaro Convertible –– Lovell’s first car, purchased in the 1980s, is in popular Emerald Turquoise, but the Camaro was rusty and rough when he got it. “I sold it to go off for college, but my father quietly had a friend buy it, and 15 years ago he surprised me with it fully restored when I started the collection,” Lovell explains.

Today, his first car is still his favorite, with a 350-cid crate motor and a Turbo 350 tranny. “It’s the easiest to drive of all the cars in the garage and a great cruiser,” he says, adding that he loves the small blocks because they better match the sub-optimal suspensions of the day.

•1932 Packard Light Eight Convertible –– Lovell’s first pre-war car. Created during the Great Depression as an entry-level economy car to downplay wealth and excess, the Light Eight did not succeed, and the model lasted just this year. A 320-cid straight-eight engine generated 110 horses, and the smaller frame delivered improved performance compared with the full-sized model. 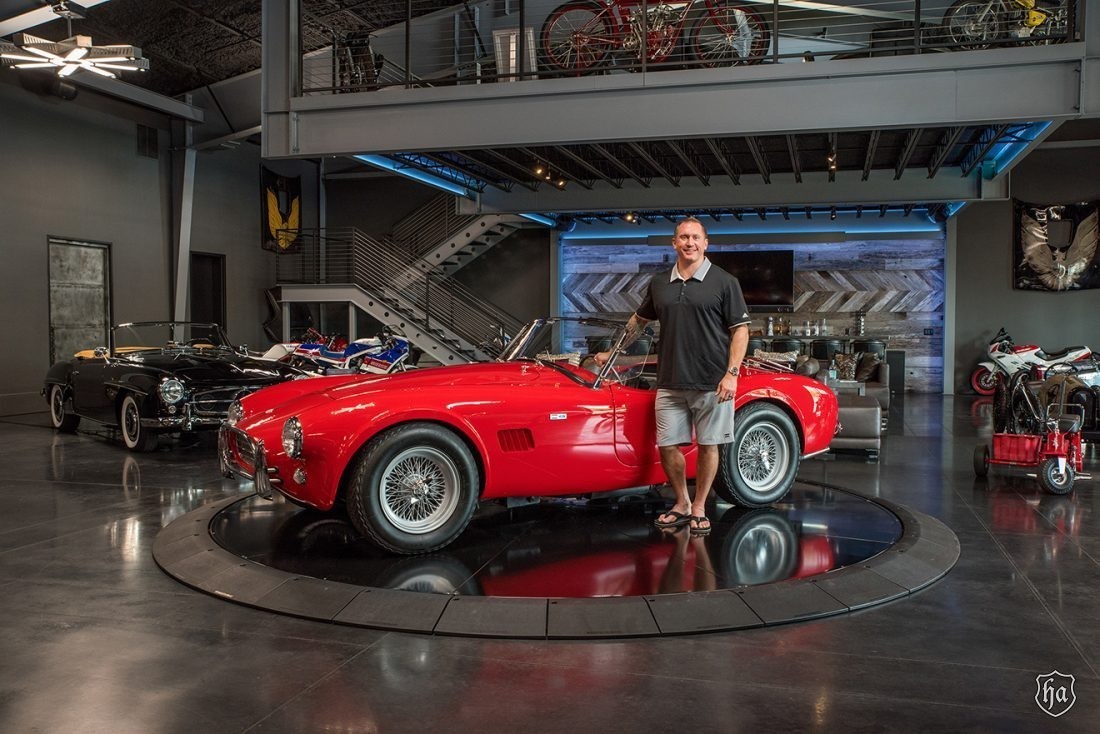 Lovell purchased the Fran Roxas-restored classic at RM Sotheby’s at the Biltmore Hotel a few years ago. The car features the standard rumble seat and a travel trunk.

“I absolutely fell in love with its sleek styling and amazing design,” Lovell says. “It drives better than any other car I own. We’re in it regularly, and it’s amazing.”

•Tri-Fives –– Ellis grew up with the Chevy 1955, 1956 and 1957 Belairs. In homage to that, his son’s collection includes a two-tone 1955 Dusk Rose/India Ivory Bel Air. “One color is the least popular that year and the off-white was the most popular,” he says. About 15 years ago, we restored it with a 454-cid powerplant, punched out to 462 cubic inches. 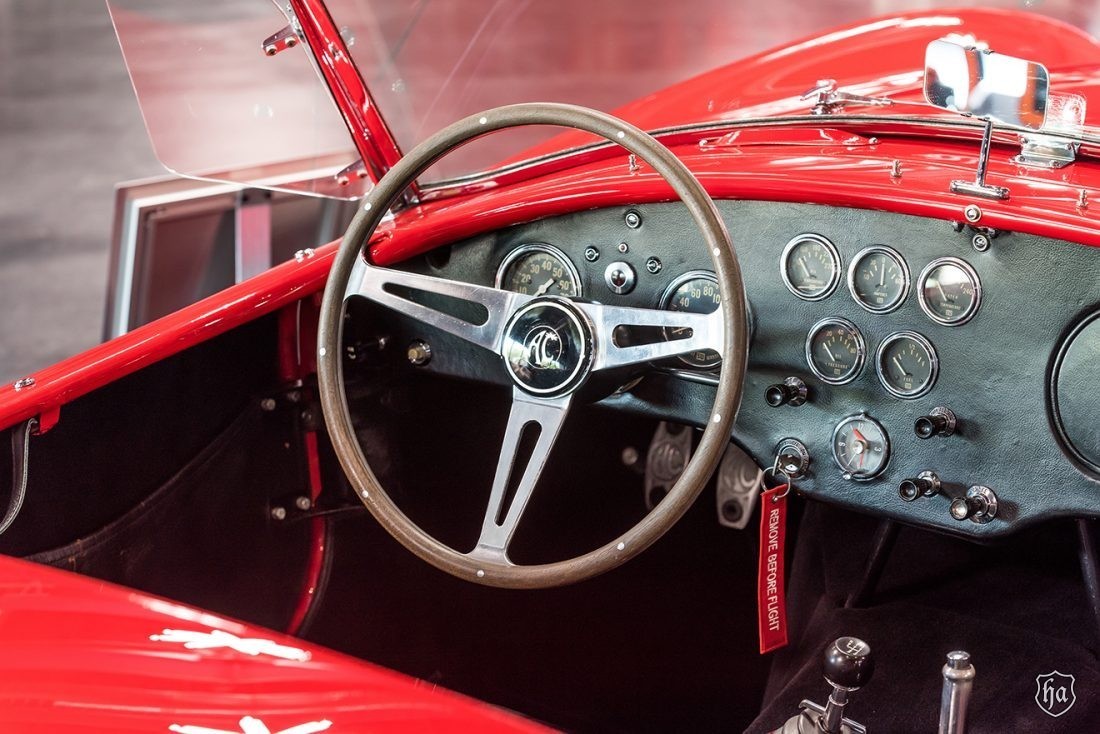 Representing the following year, a 1956 Matador Red ragtop is showroom quality, with the original 265-cid V-8, a three speed automatic and the optional “Power Pack,” which included dual exhausts and a Rochester four-barrel. Lovell added seat belts to take the family for rides. “It’s so Americana, a cool cruiser,” he says.

•1957 Mercedes 190SL Convertible –– Ellis has been a Mercedes judge for many years and is still an active member of the 190SL Club. This is a car his son grew up driving. Ellis restored it, achieving 499.3 out of 500 points at an international 190 meet in 2014, and it remains one of the highest scoring 190s in existence, says Lovell.

•1967 Corvette –– A small-block 327-cid/350-horse convertible, the third-generation convertible has the side-pipe option. “We bought this car in pieces in 1993 and got it finished and back on the road in 2001, just before Stacy and I were married in 2002. That car has stayed with us since, no matter where we lived or how small our garage was. We have a lot of great memories in it. I love that car.”

•1969 Chevrolet Chevelle –– “Every true car guy dreams of a full pro street-level drag car, and this car is that machine for me,” he says. He found it in the 1980s with a factory 396-cubic-inch engine which now propels his 1969 Camaro, upgraded to 550 horses.

In its place he swapped in a 540-cubic-inch Bill Mitchell motor, rebuilt by Dean Gellner, and added nitrous for 925 horsepower and low-9-second quarters. “I know I can get it into the 8s,” he says. 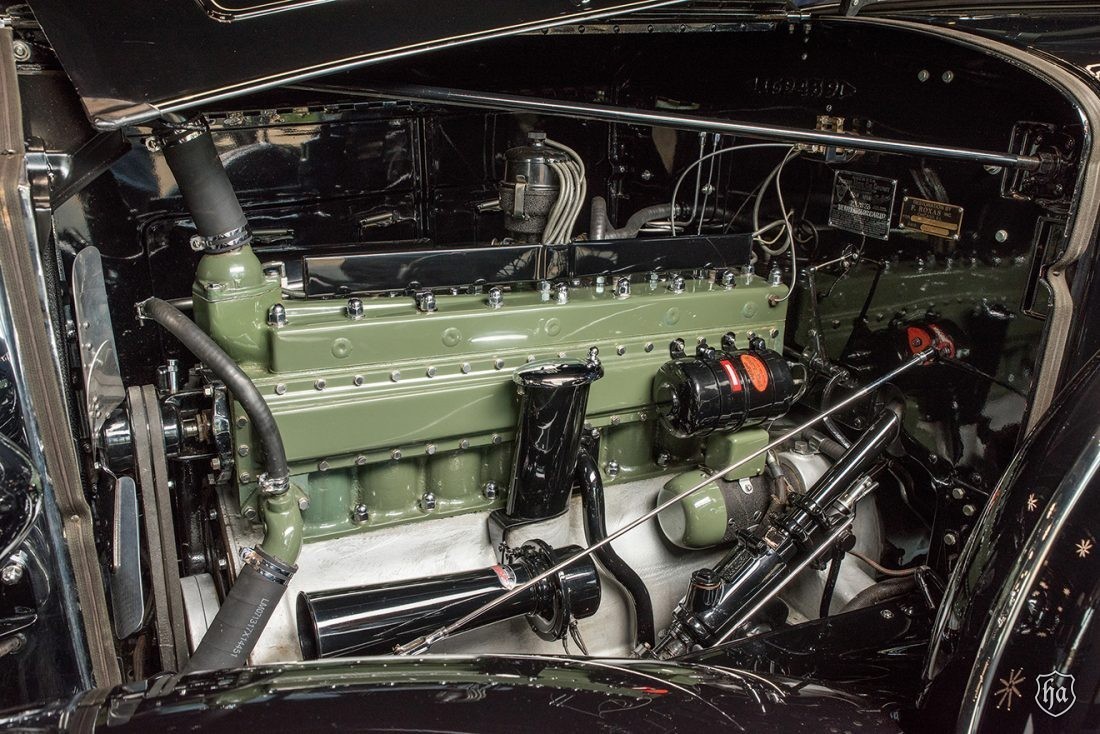 •1965 Shelby Cobra –– This was always his dream car, with the connection to the great Carroll Shelby and his world-championship racing team. He found the one-owner 289-cid, 26,000-original-mile car that was sold new in Illinois. It had been repainted but, otherwise, “It’s clean, original and authentic,” he says. “For a while, I didn’t drive it and treated it like it was a unicorn. Now, like everything else in the garage, it’s driven and enjoyed.”

•1987 Buick Grand National –– “This is a car I always loved, as it was the quickest American factory production vehicle produced during my high school years,” says Lovell.

He bought an all-original car years ago in Ohio with just 12,000 original miles. He traded it later for the Chevelle. When his then 8-year-old daughter found out, she told him how upset she was. “That’s my favorite car,” she said. So he bought it back. 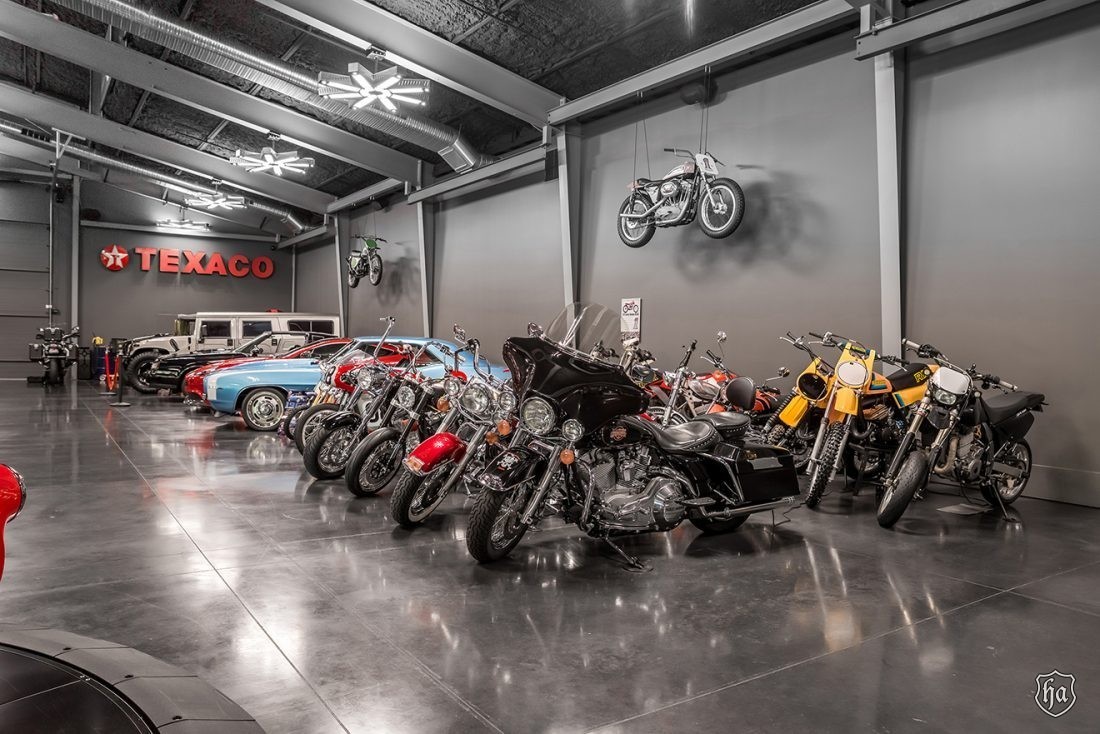 “It’s hers now,” he says. “She asked me to get her some red velvet stanchions to put around it so that no one touches it. “When she turns 16, it will be her daily driver.”

If you or someone you know has a GreatGarages and would like it to be considered for an upcoming issue, please email us at info@Highline-Autos.com. 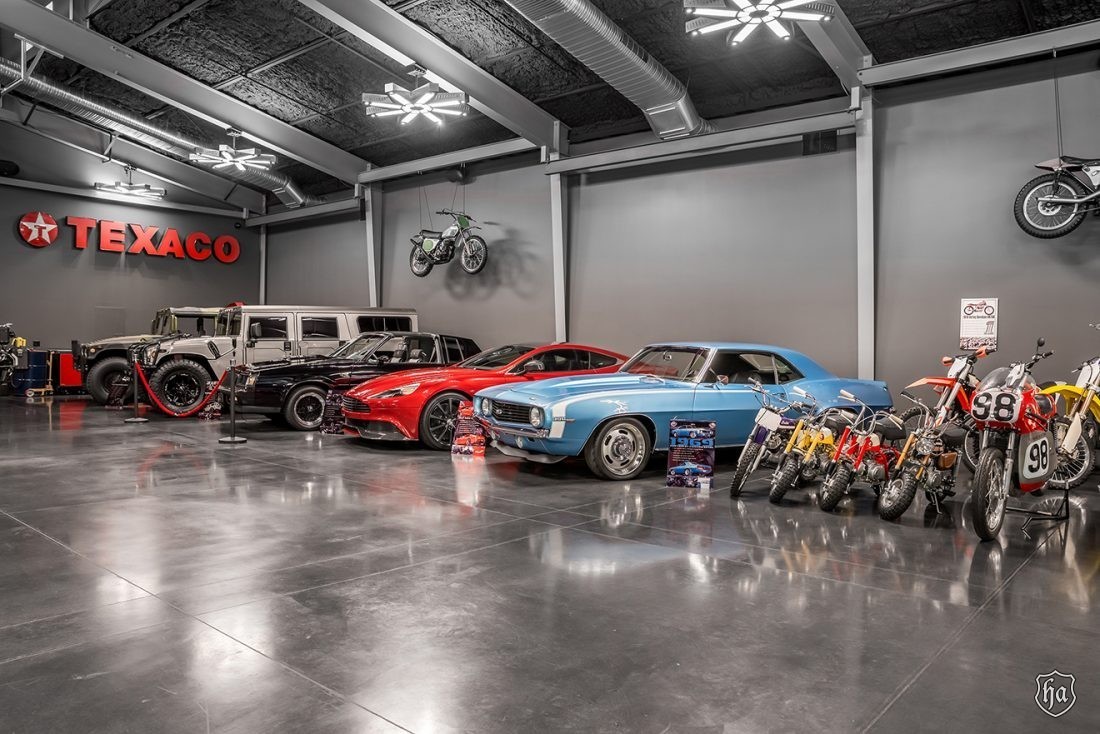 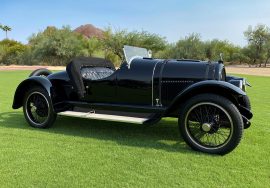 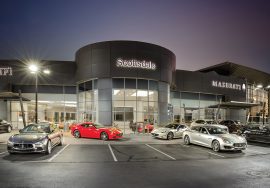 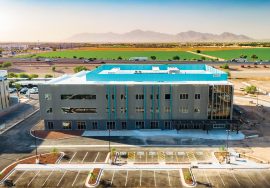