Through his uniquely artful lens, a Bugatti and a Horch from the ’30s dramatically display their power and beauty, a ‘40s Delahaye models its voluptuous curves, a Cunningham bulges power and even a well-patinaed Austin-Healey offers a “Grace” that brings tears.

The celebrated automotive photographer will discuss “A Career with Cars and Cameras” during Monterey Car Week at The Inn at Spanish Bay, 1 p.m., as part of the Pebble Beach Classic Car Forum Thursday, August 23. Reservations are required, although admission is free.

“I’ll be talking a little about my studio techniques, how I’ve been fortunate to work over the years with stewards of great cars, museums, manufacturers and collectors to preserve our automotive history. And, I’ll be offering some examples of my work,” says Furman, who’s photographed noted collections such as the Mullin Automotive Museum in Oxnard and the Simeone Museum in his native Philadelphia.

“Michael Furman has taken the art of photographing automobiles to a new level,” says Dr. Fred Simeone, whose stellar collection includes Daytona Coupe CSX2287, The “Hippie” Porsche 917, second at LeMans in 1970, the LeMans-winning Bugatti “Tank,” and the Mille Miglia-winning Alfa Romeo 8C 2900B MM. “Whatever he photographs seems to develop a personality and immediately a call to appreciate the designer’s skill.”

His standard practice, Simeone explains: “The room is draped in nonreflective black velvet. Single illumination, longer and wider than the car, bathes his subject. He shoots from 75 feet away, often at ground level, to get the true perspective of the car as it was designed. Nothing is airbrushed or altered. The integrity of his appreciation of the car is manifest in the final result.

“The combination of thoughtful positioning, revealing lighting, state-of-the-art equipment, and most notably, Michael’s keen aesthetic sense produce an incomparable result, easily recognized by automotive aficionados everywhere,” he adds. “You often hear you have never realized the lines of your own automobile until seeing a Furman image of it.”

Seeing the Light in the Basement
In Philly, his neighbor’s father had built a basement darkroom. “They had a few wonderful pre-war cameras, and I immediately took an interest,” he says. That was in 1964. At about the same time, he saw a 1963 Corvette Split Window Coupe, one of the world’s most beautiful sports cars, and snapped a shot. That focused him for life.

“Although the cameras and the subject matter first motivated me, it was a fascination with light that really captivated me,” he explains. I spent all of junior and senior high school gazing out the window watching the effect of the sun as the day progressed. When I got home from school, I went right into the darkroom and worked all night. I was obsessed.”

He chose the Rochester Institute of Technology in photogenic upstate New York for college because this was the only program in the country offering a BFA in Photographic Illustration. “The professors were very considerate of me, and, because I had a fair amount of experience, they allowed me to explore things on my own and at my own pace,” he says.

Returning to Philadelphia with his rare degree, he also already had a professional-looking portfolio to call on ad agencies and design firms to begin establishing his name. “Because I was so young, and very motivated, many of the older agency people took a liking to me,” he recalls. “I rewarded their faith in me by never letting them down, no matter how hard I had to work to please them.”

For the first decade of business, he made a good living shooting studio still life: portraits, fashion and other niches. He investigated the work of well-known photographers to understand concepts and trends and styles.

“For example, the wonderful simplicity of Richard Avedon’s fashion and portrait work taught me to allow the subject matter to come through,” he explains. “The photograph is about the subject, not the person who took the picture.”

Moving forward, he wanted to shoot subjects that he had an interest in, and cars were out front. In 1983, he borrowed a Mercedes-Benz 380 SEC from a local dealer, which allowed him to shoot in their repair area. He sent a few shots to the marque’s New York ad agency. Two days later, he met with its representatives and had his first car assignment.

For another decade, he worked for manufacturers and then was asked to shoot some classic cars for a paper company promotion. “After five minutes with a Delahaye, Bugatti, Stutz and Delage, I was hooked,” he recalls. “I’ve been shooting the great collections, unique cars and historically significant cars ever since.”

He’s had gallery and museum exhibitions in the U.S., Europe and Asia, including The Louvre, MFA Boston, The High Museum, Phoenix Art Museum and the Beijing Automotive Museum. In 2005 he founded Coachbuilt Press and has written, photographed and published 20-plus titles and participated in another 20 books such as Speed, Style, and Beauty: Cars from the Ralph Lauren Collection. And, he’s a frequent featured artist, judge and sponsor at concours events nationwide.

Cam Ingram worked with Furman while co-publishing Porsche Unexpected: Discoveries in Collecting with him in 2014.

“Michael’s uncanny eye and portraiture approach to automobile photography is one of the highlights of Porsche Unexpected. His images convey the evolution of the Porsche design language in a beautiful and cohesive manner. In effect, the cars and engineered details speak for themselves through his images,” he says.

The career ride has brought him to unexpected places. “I did not expect that when I picked up a camera in 1964 that I would somehow find myself in the middle of the collector car world,” Furman says. “I’ve been fortunate enough to attend major events around the world and meet some of the most extraordinary people you could imagine.”

Furman’s artistry is celebrated throughout the car industry. “Michael is the definitive studio photographer, who has taken his art to its highest form,” says Rupert Banner, group motoring director and vice president for Bonhams auction house from its New York City office.

“He has both a passion and knowledge of the cars and the people that own them and is able to capture the very essence of why a car was so appealing and continues to be today. It is no coincidence that some of the world’s finest collectors have chosen him to document their collections.”

Great Cars are Always the Focus
Here are some of his favorites in his photographic garage:

•1936 Bugatti Type 57G “Tank” (The Simeone Automotive Museum, Philadelphia, Pennsylvania) –– “This is just an extraordinary car with a fantastic race record. Being a Bugatti, it starts out at the top of the automotive food chain, but in this case, the car is even more significant than that.

“Bugatti was mostly known for Grand Prix race cars and luxurious touring cars, but this car was built to race at Le Mans, the 24-hour French sports car race that is the ultimate test of car and driver. The “Tank” not only won the race (the first of two Bugattis to do so) but then went on and set more than 20 international word speed records that were not broken for almost 30 years.”

•1936 Stout Scarab (Private collection) –– “One of only a handful that were made, the Stout Scarab was the first ‘mini-van,’ appearing decades before the genre became a staple on American roads. It is technologically fascinating with a rear engine, and only the driver and front passenger seats are bolted to the floor. The rest of the seats are loose, which makes for a memorable ride down a winding road.”

•1937 Horch 853 Sport Cabriolet (Private collection) –– “This unique car is one of the most dramatic cars one could ever hope to see, let alone photograph. It has won Best of Show at the prestigious Pebble Beach Concours d’Elegance and similar titles everywhere it appears. For a late ’30s prewar car, it has a level of artistry and grandeur you would not have expected from that era.  A true masterpiece.”

•1947 Delahaye 135MS by Figoni & Falaschi (Private collection) –– “This is one of the first concours cars I ever experienced in person. I was so moved that I asked the owner if I could bring it into the studio, and he graciously agreed. That was more than 25 years ago, and I still smile when I see this photograph.”

•1952 Cunningham C4-RK (The Collier Collection at the Revs Institute) ––“I was fortunate enough to shoot his car in 1992, and for many years it was the only car photograph of mine that hung in my studio. I don’t think any others have exceeded it, but I learned so much from the experience. I did not have any pre-conceived ideas as to what to do with it but instead allowed the car to speak for itself. That may be the most important lesson I’ve ever learned.”

•1953 Austin-Healey 100M, “Grace” (John Nikas and “Drive Away Cancer”) –– “My favorite car to photograph? Until I met John Nikas, I did not have a good answer. John’s story is a long and fascinating tale that never leaves a dry eye in the house.

“The short of it is that John’s friend purchased the Austin-Healey so that the two of them could do a cross-country trip. John’s friend became very ill with cancer and could not go with John who chose to do the roundtrip to honor him. With the help of the Southern California Healey Club, they got this disheveled little Healey running, and John set out on a memorable journey.

“The word got out about his trip and before he knew it, he was being intercepted by cancer patients –– kids and their parents –– who wanted to go for a ride in ‘Grace.’ The little car that shouldn’t have made it did, and that launched John and Grace into a three-year 300,000-plus mile journey, putting smiles on the faces of 20,000 young cancer patients.

“More than 6,500 names have been written with a Sharpie on the car, many of these fighting cancer, many who have died since that journey. If there was ever a car and driver to put a smile on your face and a tear in your eye, it’s John and ‘Grace.’”

A Home For Every Reason 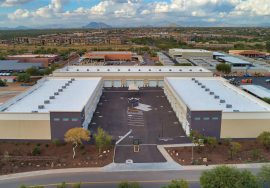 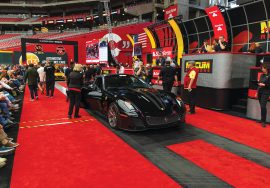