The first vote Henry Leland cast was for Abraham Lincoln in 1864; more than five decades later, he named his car for his hero. That great automotive marque, Lincoln, is 100 this year.

Leland was one of the founders of Cadillac, which joined General Motors in 1909; he stayed on in an executive position until 1917, when he and the company’s president, William Durant, squabbled.

In August of that year, Leland and son Wilfred founded the Lincoln Motor Company, making Liberty V-12 engines for World War I, then Lincoln cars. The company had a tough road transitioning to a peacetime economy, and it was placed in receivership.

The Ford Motor Company, at Edsel Ford’s suggestion, purchased Lincoln from bankruptcy for $8 million February 4, 1922. To date, 3,407 Lincolns had been produced, according to Ford Motor Company Archives. The Lelands stayed on to manage, but father and son were removed in June.

Beginning the next year, you could obtain a Model L with coachbuilt bodywork, following other luxury cars such as Duesenberg and Rolls-Royce. That year Ford produced 7,875 cars from the Detroit plant, almost doubling the Lelands’ output.

The company has posted a number of firsts. In 1961, Lincoln Continental offered the industry’s first 12-month/12,000-mile warranty which was soon upped to 2-year/ 24,000 miles when other companies matched the one year/12k. 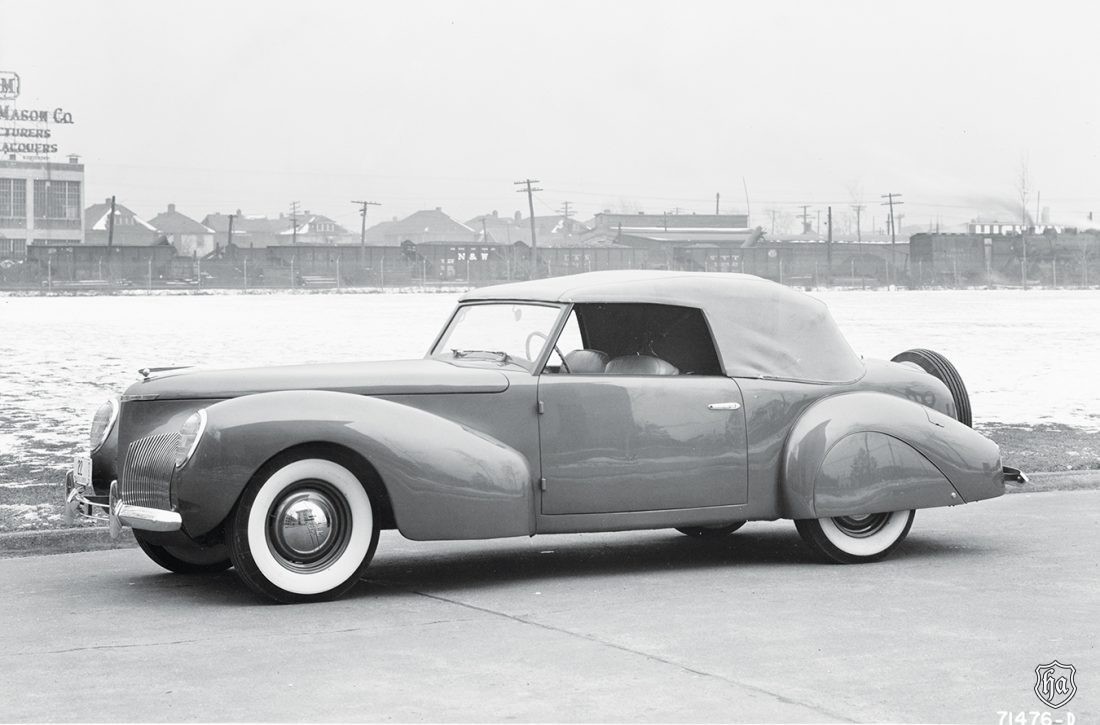 Lincoln produced its one-millionth car March 25, 1968, at the Wixom Assembly Plant. In October 1997, the five-millionth vehicle was built. In 1978, the Ford Motor Company released a Diamond Jubilee Edition Continental Mark V to celebrate the 75th anniversary.

•1920 Lincoln “L” –– Henry Leland released his first car September 14, 1920, in Detroit. An ad promised the coupe delivers “consummate ease, comfort and convenience.” Even more, “The entire bearing is one of grace, dignity and individuality.”

The car was to rival luxury cars such as Cadillac, Pierce-Arrow, Peerless, Marmon, Packard, Duesenberg and Rolls-Royce. The “L” series cars were powered by an L-head V-8 engine based on the Liberty V-12 which he and Wilfred had produced for World War I.

Calvin Coolidge, elected president in 1924, chose a Lincoln L as his presidential car. In 1939, the Secret Service leased the “Sunshine Special” for President Franklin Roosevelt; six-feet high, the armor-plated car weighed 9,300 pounds and was 21 ½ feet long. He used it at Yalta, Casablanca, Teheran and Malta, and the limo stayed in presidential service for 11 years.

The final year for the “L” series was 1930. The outstanding “K” cars followed, the first model produced completely by Ford; three available wheelbases could be chosen, and 20 coachbuilders created cars. The “K” series cars were produced through 1940.

The original limited-production Lincoln Zephyr Continental Cabriolet was a 1940 model and the division’s top of the line; in 1941 it became a separate model Lincoln. This was America’s first popular streamlined vehicle.

Edsel Ford presented the first one (of 104) to actor Mickey Rooney who had filmed Young Tom Edison at Greenfield Village, in Dearborn, Michigan. Henry Ford established the campus in 1933; here he relocated and reconstructed historic buildings, including a replica of Edison’s Menlo Park, New Jersey, laboratory.

In 1940, the Zephyr finished the 306.5-mile Gilmore Yosemite Run. Officially discontinued two years later because of World War II, the car appeared under the Lincoln brand until 1949.

Other Lincolns have fared well on the track. In 1921, W.W. ‘Bill’ Bramlette guided his 1921 Lincoln Road Runner to a first place at the Nevada 1000-Mile race. In 1954, a Lincoln entry in the Mexican Road Race was first.

•1956 Lincoln Mk II –– In September 1938, Edsel Ford returned to The United States from Europe determined to build a car exemplifying continental elegance; he and Gregorie chatted about ideas.

On March 1, 1939, Edsel Ford received the inaugural Mark I at his Florida home. The first publically available car was a 1941 model, also known as the Lincoln Continental. The last Mark I appeared in 1948. In 1959, Time magazine ranked the model number six out of the “100 best-designed commercial products of modern times.”

Well received and wider and longer than its predecessors, the 1956 Continental debuted at the Paris Auto Show October 6, 1955, but its price of $9,695 outpriced the market. The car is not a Lincoln, however, as a new Continental division was established in 1955, lasting just two years. The signature four-point star badge first appeared on the 1956 Continental Mark II, designed by Robert Thomas.

Lincoln and Lincoln Continental built only 3,000 Continental Mark IIs from 1955 to 1957. Nelson Rockefeller had one as well as Barry Goldwater, Frank Sinatra, Cecil B. DeMille, R.J. Reynolds, Bill Harrah, Elvis Presley and the Shah of Iran

•1961 Lincoln Continental –– On October 3, 1960, the company debuted the now famous coach or “suicide doors”: Both front and rear connect to the “B” pillar, opening in the middle.

“Notice the doors,” an advertisement began, touting the car’s glamour and elegance. “And notice how they open. From the center, to make everyone’s entrances graceful.”

The car is powered by a 300-horsepower 430-cid V-8. Notable owners included Walt Disney, Neil Young and Pablo Picasso. The center-opening doors are available through 1969. 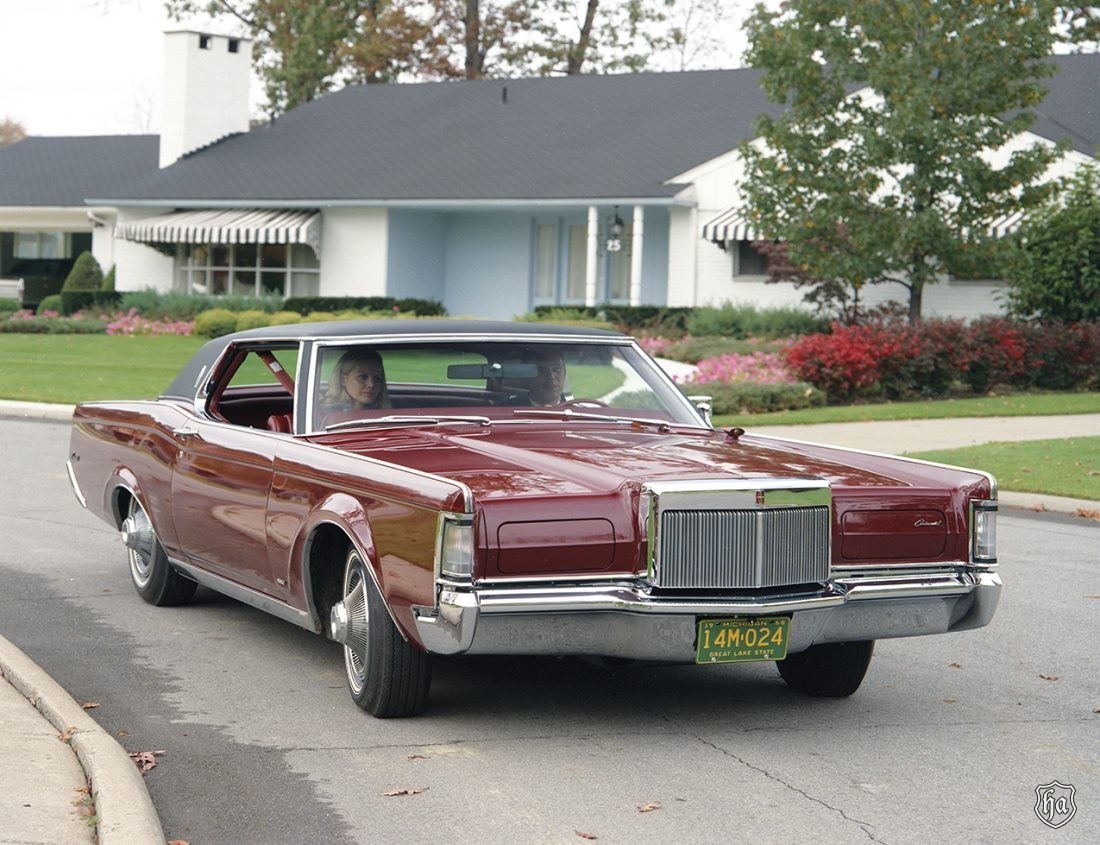 They inspired no suicides, the company says, and collectors love them for that dramatic Hollywood door placement as well as the chrome-accented upper shoulder line.

•1965 Lincoln Continental four-door sedan –– Fitted with a 429-cubic-inch V-8 and an automatic, this classic “boat” has 320 horsepower and 465 lb-ft of torque. At 5,475 pounds, it could do about 120 mph and offered around 10 mpg, but no one cared about the cost of gas then, even premium. Equally fetching is the four-door convertible.

•1979 Lincoln Mark V Bill Blass Edition –– Named for the Indiana-born clothes designer, William Ralph Blass (1922–2002), the division produced the special edition from 1976 to 1992 to recall “an all-American yachting party on the Fourth of July.” With two-tone paint, gold pinstripe, choice of roof styles, the fashion designer car in 1979 added $2,744 to the sticker of a standard Continental.

In July 1979, the Lincoln Continental Mark VI appeared, and in November 1983 the 1984 Lincoln Mark VII, with the word “Continental” dropped. The 1993 Mark VIII, the last of the Mark series, appeared in December 1992. In June 1998, a Mark VIII Collector’s Edition was offered in limited numbers with special paint, trim and other details.

Power comes from a 3-liter twin-turbocharged V-6, with 400 horsepower and 400 lb.-ft. of torque. Drivers personalize their road experience with three modes, Normal, Sport and Comfort.

Lincoln added six inches to the wheelbase for larger coach doors and more legroom. And, buyers can take advantage of Lincoln’s Black Label options, including Chalet and Thoroughbred.

“This Lincoln Continental echoes a design that captured the hearts of car enthusiasts around the world,” said Joy Falotico, president, The Lincoln Motor Company, at its release. “It’s something bespoke or unique only Lincoln can offer in a thoroughly modern way.”