The “King of Clear Bra” has come to Scottsdale.

Casiano is completing an addition to the existing facility that will specialize in clear bra installations, window tints and ceramic sealants as well as provide space for advanced staff training.

One Armor employs 75-plus technicians in Arizona with an additional 80 throughout the United States. It is the largest window tint and clear bra service company on the continent.

“We wanted to be the number-one spot to have clear bra paint-protection film installed on exotic and super cars, so we brought multiple installers in to interview and work with for almost two years,” says Casiano, a Scottsdale resident who has been in the car industry for 25 years.

“We wanted the best to lead the largest clear bra staff in America, making sure that the quality of our installations are state of the art and superior to any competition, and Chris came highly recommended by the manufacturer. He was so far above the other candidates that it wasn’t even a race,” he adds.

“We apply it similar to tint or vinyl. It has an adhesive backing, so we use various water solutions and squeegees to apply the product. We stretch and compress the film with skilled techniques to conform it to the various compound curves found on vehicles for a near-invisible finished product,” he says.

Generally, clear bra is applied to newer vehicles to preserve and protect the new paint. Most owners select the hood, bumper, fenders, headlights and rocker panels –– those areas most susceptible to damage while driving.

However, “Doing the entire car is becoming more and more popular for high-end and exotic vehicles where the price tags are in the six figures and they want all of their paint protected bumper to bumper,” West says.

An Anchorage, Alaska, native, he graduated with a bachelor’s degree in civil engineering and, after learning about paint protection film in 2003 from a friend, attended a training course. His aptitude for installation and love of the industry quickly brought him international recognition.

Mentored by his dad, he started his Alaska-based automotive clear bra business from which he traveled around the world installing clear bra on some of the most exclusive cars for the most affluent clients.

The paint-protection-film industry has world competitions, which West has won top placement, consecutively, for the last five years.

Why has he been so successful? And what does his expertise bring to One Armor?

First, a great product. Two, quality of the installation.

One Armor has partnered with XPEL, the leading manufacturer of paint-protection film. Its Ultimate Plus has great clarity and self-healing attributes in which surface scratches fix themselves with heat from the sun or hot water. In addition, the company provides a comprehensive ten-year warranty, he explains.

Skill is essential. “I have been flown in to install on some of the most exclusive cars in the world, including Buggati Chirons, Ferrari LaFerraris and Lamborghini Centenarios,” he says.

“So, between my experience leading a crew of amazing installers here and using the top film in the industry,” he says, “One Armor provides a service second to none.”

For more information on clear bra and other One Armor services, see onearmor.com or call 602.828.1175. Follow @onearmor on Instagram. 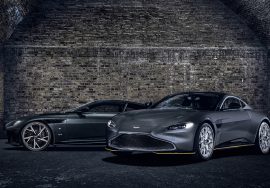