The Scottsdale resident has 34 cars in his collection — most numbers-matching documented Novas but also modified pro touring cars, gassers and drag cars. These include a 1966 Nova — “Grumpy’s Toy Clone” — signed by Bill Jenkins; a 1966 Nova gasser — “Nickey Nova” — a Dick Harrell clone; every Nova station wagon, 1962 through 1967. And, he’s just added a 1967 “No Camino” — a custom- built Nova El Camino.

Always busy with his cars, he’s currently restoring a 1966 Nova SS, a 275-horse, four-speed car. “It’s just like the one I sold so many years ago to buy my first home,” he says.

His rocket-ship ride to Nova collecting began in native Kansas City, Mo. At 9, he started riding Cushman Scooters; that got him into the fast lane. He married his high school sweetheart, Liz, and moved to Arizona with their two children in 1979. A masonry contractor, he did well in the booming state and retired in 1996 at a ripe 48.

But, with the help of two of his children, he went from bricks to lifts, starting AutoNow, better known as LiftedTrucks.com, specializing in lifted trucks and SUVs in Phoenix. Today, his homes in Scottsdale, Flagstaff and Maui have space for 39 cars. In his Scottsdale garage, he also has old bicycles, Cushman Scooters, a Nova go-kart, 50-plus 1/18 car models in glass cases, a Nova hubcap wall display and a gas pump.

His Nova career almost burned out early. “When my wife and I got married, we had a 1966 Nova SS, and when we purchased our first home, I was told I wouldn’t qualify for the home loan as long as I had a $60 car payment,” Dan recalls. “I decided to sell my Nova and put my family first. I told my wife I would have another Nova some day.”

His business strong and family happy (today seven grandchildren), he got back into Novas in 1991, when he built his home in Scottsdale. His first rotisserie restoration was a 1967 Nova SC, “Satisfaction”: “From there I started collecting Novas.”

Here are some of Dan’s very satisfying cars:

•1967 Nova L79 Sports Coupe — “One of six made and only two known to exist. It’s currently being restored by Wayne Bushey.”

•1966 Nova L79 2-door sedan — “It’s red with red interior. It sold new in Phoenix at Courtesy Chevrolet. Documented with Protect-O-Plate and sales contract. This car was restored in 1998 with mostly NOS parts. The car has the sleeper look, but is known for the L79 package, 350 horsepower, four-speed and 12-bolt rear end.”

•1967 Nova Sports Coupe “Satisfaction” — “This is the car that started my collection back in 1991. The car has a ZZ3 motor, four-speed and four-wheel disc brakes. Color is Torch Red with tan interior. I named the car “Satisfaction” because the Rolling Stones was my favorite rock group at the time.

Now, when I go out into my garage I get a lot of satisfaction being around my cars and thinking of all the good times they have given us and all the nice friends we have made over the years.”

•1968 Nova SS COPO — “One of only 50 COPO Novas ordered by Fred Gibb Chevy in 1968. These cars came with the L78 396/375 high-compression engine and the experimental Turbo 400 Automatic transmission. Of this group, this is the only Matador Red Nova that remains.

This vehicle underwent a painstaking three-year frame-off restoration with an incredible amount of GM NOS parts. The car retains the original factory-installed engine, transmission and rear-end. The car scored an incredible 997/1000 at the first show it attended.

•1970 Yenko Deuce Nova — “This was a limited production vehicle, equipped from the factory with COPO 9010, a special performance package including an LT1 350/360 horsepower engine, dual-exhaust system, increased cooling capacity and special suspension. The car is documented with the COPO Connection ID number signed by Ed Cunneen. The VIN lists the car as sold at Grossman Chevrolet in the Yenko Sportscar Club (SYC). The car was owned by Reggie Jackson for 22 years. I have photos of Reggie then and now standing next to the car.”

Why Novas? “I’ve owned a lot of different cars over the years, but Novas were always my favorite. I guess it goes back to that first home purchase when I had to sell my first Nova. When you’re told you can’t have something, it makes you want it more. Or, it could be I like the looks and performance. Whatever the reasons, I’ll always keep looking for Novas — and building more garages.”

If you or someone you know has a GreatGarage and would like it to be considered for an upcoming issue, e-mail us at GreatGarages@highline-autos.com. 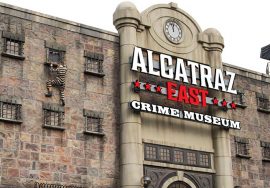