At Barrett-Jackson Scottsdale, it’s always pedal to the metal for cars and community.

The 45th Barrett-Jackson Anniversary Scottsdale auction, Jan. 23−31, 2016, at WestWorld of Scottsdale, has more than 1,400 cars docketed, most selling at No Reserve, and will welcome approximately 5,000 bidders from all 50 states and across the world, 350 vendors and sponsors, 350,000 automotive fans and millions of Internet, social media and television viewers worldwide.

“When my father, Russ Jackson, and his friend, Tom Barrett, held their first auction 45 years ago, with a few select cars in a hotel parking lot in Scottsdale, they could not have envisioned the world event that it has become,” says Craig Jackson, chairman and CEO of Scottsdale-based Barrett-Jackson, which also produces annual car auctions in Palm Beach, Florida; Las Vegas, Nevada; and the newest at Mohegan Sun in Connecticut, June 23−25, 2016.

“Now, more than four decades after that first Sunday afternoon, Barrett-Jackson is the Super Bowl of car auctions,” Jackson says, who has twice been named to Motor Trend’s Top 50 Power List. “I’m proud to call Scottsdale home and honored to receive Mayor Lane’s recognition for our contribution to the community.”

In nine days of celebration and car mania, The World’s Greatest Collector Car Auctions® also offers the new “Behind the Hobby” Collector Car Symposiums; Ride ’N Drives and Thrill Rides with Ford, Chevrolet and Dodge; the Gas Monkey Garage and Patio; and even a Barrett-Jackson Bull-Riding Challenge.

“The Barrett-Jackson 45th anniversary celebration is a true automotive lifestyle experience and the most incredible environment of its kind anywhere,” says Steve Davis, company president. “Our amazing docket will be a milestone in Barrett-Jackson history, showcasing cars that will impress even the most car-savvy professionals.”

Sold! –– On Community and Charities

“We’re honored to be able to help raise funds supporting a variety of charities, including our veterans and active service members and their families, cancer research at TGen in Phoenix, Childhelp and numerous other causes throughout the community,” Jackson says.

The Barrett-Jackson Cancer Research Fund at TGen in Memory of Russ and Brian Jackson was established in 2010. Craig’s father, Russ, and his older brother, Brian, both died from colon cancer, in 1993 and 1995, respectively. This year, a 2015 Chevrolet Camaro Z/28 that has lapped Nürburgring in fewer than eight minutes will be auctioned for TGen.

“Craig Jackson and his team at Barrett-Jackson have provided the leadership necessary to bring TGen’s personalized medicine to the families that need it the most,” said TGen Foundation President Michael Bassoff. “We are grateful that Craig has chosen to honor his father, Russ, and brother, Brian, in this special way.”

Childhelp, the national nonprofit dedicated to the prevention and treatment of child abuse, was particularly important to his brother Brian and mother Nellie, and it remains an essential part of the charity life for Barrett-Jackson 20 years after his death.

“Originating with Nellie Jackson, and living through the generous spirit of her son, Craig Jackson, the Barrett-Jackson auctions have raised millions of dollars to help fuel lifesaving intervention and treatment for abused children throughout the United States,” says Michael Medoro, chief development officer of Childhelp.

“Childhelp has directly impacted the lives of more than 10 million children nationally, and we could not have done that without the driving support of individuals like Carolyn and Craig Jackson and the support he gives through the Barrett-Jackson Collector Car Auction.”

Through SEMA Cares and benefitting Childhelp, is a custom 2015 Jeep Wrangler Rubicon Edition with dozens of products from leading aftermarket manufacturers. This one-off custom Jeep will cross the block on Wednesday, Jan. 27. And Jay Leno will auction his custom 2000 Harley-Davidson F-150, (#3006) Jan. 29, with proceeds donated to the National Multiple Sclerosis Society.

The 2017 Acura NSX VIN #001 supercar will also be sold for the Pediatric Brain Tumor Foundation, serving 28,000-plus children in the United States, and Camp Southern Ground, the passion project of Grammy Award-winning artist Zac Brown for children ages 7−17, providing programs centering on superior nutrition, physical exercise and the latest therapies.

Among other charity cars this year is a 2012 Dodge NASCAR No. 2 Miller Lite Dodge driven by Brad Keselowski at the AAA Texas 500 race during his 2012 NASCAR Sprint Cup Championship season, benefitting the Paralyzed Veterans of America, and a 2000 Ford F-150 Harley Davidson Pickup, a one-off vehicle presented to Jay Leno by Ford Division President Jim O’Connor in May 2000, with proceeds to the National Multiple Sclerosis Society.

“We are driven to remain the greatest collector car auction in the world,” Jackson says, “and to maintain the high levels of community investment that have also set Barrett-Jackson apart through these first 45 years.”

On a Roll, from Michigan to Scottsdale

Filled with postwar optimism for the opportunism of the American West, family patriarchs Russ and Nellie Jackson hopped in their ’50s Cadillac and moved from Michigan to Scottsdale in 1960, opening a full-service car wash while maintaining their passion for classic cars, particularly prewar 12- and 16-cylinder-powered Caddys. Tom Barrett III and family had migrated to Scottsdale about the same time.

After the Jackson family acquired the company, the auction grew across the board –– in numbers of cars, attendance and coverage. The Financial News Network televised part of the Scottsdale auction in 1994, and now all Barrett-Jackson auctions are live on Discovery Channel, Velocity and worldwide on Discovery Networks International.

Moving with the ever-changing culture and multimedia, Barrett-Jackson has taken initiative to reach the younger demographics. In addition to the live television coverage, Facebook, Instagram, Twitter, Pinterest, LinkedIn, live streaming of the auctions on Barrett-Jackson.com and the Beyond the Block app provide instantaneous coverage for the mobile and social world.

Hundreds of other employees and contractors also contribute to make each auction a success, from planning to set-up and take-down.

“I learned the business from the shop floor up,” Jackson says. “From wrench-turning and block-sanding at the restoration shop to directing parking and traffic flow around the auction grounds, I developed a passion for this industry and learned all of what it takes to put on these mega-events.”

“From me, on to Steve and Gary and through to our entire team, we proudly carry the founding traditions, passion and vision of the Barrett-Jackson auctions with us as the industry standard bearer,” he says. “We are inspired every day to remain the world’s greatest car auction company –– and a great community contributor, too.” 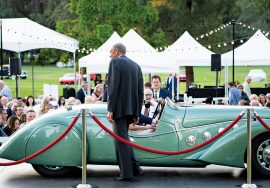